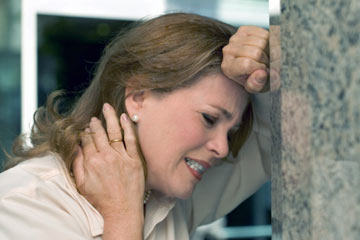 According to the Chicago Dental Society, the No. 1 cause of teeth grinding is believed to be stress and anxiety.
Medioimages/Photodisc/Thinkstock

Do you practice bruxism? No, it's not a strange new religion or the latest exercise craze to come out of L.A. It's the complicated medical term for the simple act of grinding your teeth.

If you are a "bruxer," you're not alone. Some estimates put the number of teeth grinders in America at nearly 47 million, or 15 percent of the population [source: Sweeney]. For the most part, teeth grinding -- which can happen during the day or at night while you're sleeping -- is a relatively minor affliction and may not even need treatment. However, in other cases, grinding your teeth can lead to jaw problems or damage to the teeth.

Here, we give you all you need to know to find out if you're a bruxer, including the causes of teeth grinding, symptoms to watch out for and treatments that can give your teeth a break -- before they literally break.

According to the Chicago Dental Society, 65 percent of dentists say they are hearing about an increase in jaw clenching and teeth grinding in their patients [source: Kramer]. They also say that 75 percent of their patients report greater stress in their lives. The correlation is not coincidental, as the No. 1 cause of teeth grinding is believed to be stress and anxiety.

If you're under a lot of stress and your mom or dad is a bruxer, chances are good you will grind, too, as teeth-grinding is thought to be an inherited trait. And if you're also a young smoking woman, you're pretty much guaranteed to be a teeth grinder. Three times more women than men suffer from bruxism, smokers are five times more likely to have bruxism episodes and the condition afflicts those between the ages of 20 and 40 the most [source: Hurst].

Teeth grinding can also be a side-effect of certain psychiatric medicines such as antidepressants like Lexapro.

One final potential cause of teeth grinding is an abnormal alignment of the upper and lower teeth. This causes a condition known as malocclusion and can be diagnosed by your dentist. Typically, when the bite is corrected, a bruxer suffering from malocclusion will stop grinding.

Considering that grinding your teeth can put as much as 250 pounds of pressure on them (as opposed to the 20 to 40 pounds you exert while chewing), and that nocturnal bruxers grind up to 40 minutes of every hour while they sleep, tooth damage from grinding isn't hard to imagine [source: Anderson]. In fact, in addition to cracking and chipping teeth, bruxers can wear away their enamel 10 times faster than non-grinders [source: Sweeney]. Even if the teeth of a grinder can stand up to the extreme abuse that comes from grinding, chances are that they will eventually become more sensitive as a result of the action. Swollen gums may also result.

Not only do the teeth and gums suffer from grinding, but the face and jaw can experience pain as well. Grinding engages the masseter muscle (the largest in the head), which can become aggravated from the continuing stress, causing headaches or earaches. Additionally, problems with the temporomandibular joint, known as TMJ, can also develop from bruxism.

Are you a grinder?

If you grind or clench your teeth during the day, spotting the problem is as simple as paying more attention. If, however, you grind at night, you might not know that you're doing so. Without a sleep partner to tell you if they see or hear you grinding, your next best option is to see if you have any of the symptoms listed here. If so, it is a good idea to head to your dentist who can check for visible signs of wear on the surface of your teeth, as well as tenderness in your jaw muscles and joints.

How to Prevent Teeth Grinding

For most cases of teeth grinding, the answer to stopping the behavior sounds simple: just relax! Of course, as anyone who's tried it knows, battling stress is anything but simple. If you suspect, like most Americans, your teeth-grinding behavior is triggered by too much stress in your life, you might want to try relaxation techniques such as meditation, exercise, biofeedback or stretches -- especially those that help relax the muscles of the neck and jaw.

Another good way to relax the muscles of the jaw is to apply a warm washcloth just below your ears on each side of your head before sleeping. Topical analgesics such as Tiger Balm or Capzasin, applied to the outside of jaw just below the ears, may also bring temporary relief. One other try-at-home technique to limit your clenching is to focus on your mouth and jaw position by keeping your tongue on the roof of your mouth, your lips closed and your teeth apart.

Things to avoid if you grind include caffeine, alcohol and tobacco (which have all been implicated in bruxism), as well as chewing on anything other than food while awake, including gum and the ends of pens and pencils.

If these techniques don't lessen your grinding, you might want to visit your dentist. He or she can fit you with either a splint or a mouth guard. Splints are usually made of hard acrylic and help keep a space between your teeth so that you don't grind. Mouth guards are usually made from a softer material and protect the teeth from the impact of grinding. However, because mouth guards don't prevent the upper and lower teeth from coming together, they may actually increase bruxism in some people.

Something else your dentist will do is to determine if your bruxism is caused by misaligned teeth. If so, he or she will propose a plan to reshape your bite.

A "Shocking" Way to Treat Bruxism

If you grind your teeth, a device known as GrindCare invented by Danish scientists might be able to help. It works by monitoring the pressure in your jaws through a small stick-on sensor similar to those used in an EKG. When the sensor determines that you are about to grind, the device sends a barely perceptible electrical impulse that interrupts the behavior -- saving your teeth and your night's sleep. Clinical studies have shown that it can reduce grinding by 50 percent in the first three weeks of use and by 80 percent between weeks six and eight [source: Hurst].

Unlike in the case of adults, where the majority of teeth grinding comes from stress, bruxism in children seems to be independent of pressure or anxiety. Although its cause in kids is largely unknown, it appears children can grind their teeth more out of habit, or perhaps as a soothing mechanism, rather than as a way of dealing with stress.

Another potential cause of juvenile bruxism can be the eruption of teeth. The statistics seem to bear this out: Teeth grinding is found in about 50 percent of infants as they teethe, and that number drops to about 30 percent as kids get ready to enter school. By the age of 7 or 8, the percentage drops dramatically again and by the age of 12 -- once all of the adult teeth have come in -- it typically disappears altogether [source: Minciotti].

According to the American Academy of Pediatrics, it is not usually necessary to treat bruxism in children under age 8. This is supported by the American Academy of Pediatric Dentistry who contend that the condition should only be treated "when the habit is of sufficient persistence, duration or intensity to damage the permanent teeth or cause other complications that affect the child's well-being" [source: Minciotti]. If childhood bruxism needs to be addressed, the most common treatment is a mouth guard.

For more information on topics related to bruxism, keep reading.