How are lasers used in dentistry? 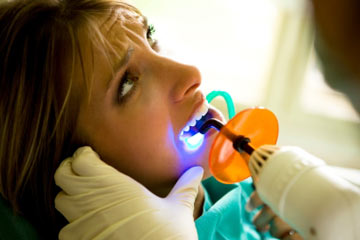 Dentists have had access to specialized, commercially available dental lasers since the 1990s.
©iStockphoto.com/webphotographeer

Lasers technically made their debut in dentistry back in 1960 [source: Parker]. American physicist Theodore Maiman developed the first laser, known as the ruby laser, that year, and exposed an extracted tooth to it. The process charred the hard tissue portion of the tooth and transferred laser energy to the pulp -- perhaps not the most auspicious result, but it sparked an interest in researching ways to incorporate lasers in dental treatments.

Over time, understanding of lasers has grown among researchers and the lasers themselves have become smaller and better suited to dental tasks, eventually making them accurate and safe enough for procedural use. By the 1990s, dentists finally had access to specialized, commercially available dental lasers [source: Parker].

Lasers (an acronym for "light amplification by the stimulation emission of radiation") deliver energy and heat in the form of light, and their uses in dentistry range from cleaning to removing tooth decay. A dental laser can also cut or eliminate tissue, such as gum tissue, when focused upon it. This works because infrared light is easily absorbed by water, and gum tissue consists largely of water [source: Parker]. Therefore, a dentist or an oral surgeon might use lasers when altering a patient's gum line.

Dentists can also use lasers to treat gum disease, because the concentrated heat generated by them is able to kill bacteria. In other situations, lasers help create brighter smiles. The tooth-bleaching chemicals used to whiten teeth are even more potent when exposed to the heat from a dental laser. Similarly, that heat can harden and "cure" a new filling that has been placed.

Many different types of lasers can now be found in dentists' offices, including short-pulsed erbium: yttrium-aluminum-garnet (Er:YAG) lasers for gum resurfacing, carbon dioxide lasers for oral surgery and Argon lasers for curing fillings.

However, since the American Dental Association (ADA) hasn't determined whether lasers provide results that are better, worse or the same as results obtained from traditional dental tools or procedures, it hasn't granted them its coveted Seal of Acceptance. Still, the association is said to remain "cautiously optimistic" about dental laser technology, and its lack of approval doesn't appear to have affected the widespread use of dental lasers [source: WebMD].

But if the ADA is still on the fence about dental lasers, why have so many dental professionals embraced them? Read on to find out more about the potential advantages -- and disadvantages -- of this technology.

Advantages and Disadvantages of Lasers

There are several potential advantages to using dental lasers. For example, there may be less of a need for anesthesia with lasers, since most dental procedures involving them reportedly cause less physical pain and anxiety for patients than traditional methods do. Also, recovery times from this type of dental work may be shorter and less uncomfortable -- perhaps in part because there's less bleeding and swelling during the laser procedures that involve soft tissue [source: WebMD].

But don't say goodbye to the dreaded dental drill just yet. There are some disadvantages to lasers -- and potential advantages to more traditional methods -- depending on the patient and his or her specific set circumstances. For one thing, the location of the "problem area" may prevent dental lasers from being used in many procedures. If your cavity is between two teeth, for example, your dentist will have to use a drill during the filling process. Even cavities that can be cleaned out with lasers usually need further work with a drill, since most tooth decay ends up in spots that are tough to accurately reach with a laser.

Additionally, dentists can't use lasers to remove old silver (mercury amalgam) fillings, because of the concern that the heat from a laser will release mercury vapor and expose patients to unsafe levels of mercury [source: McGuire]. Laser treatment is also much more expensive than other methods. While a regular dental drill may run a dental office less than $1,000 to obtain, dental lasers can cost upwards of $45,000 [source: WebMD].

Your dentist can talk more with you about the pros and cons of dental lasers, and most cities have specialized dental-laser treatment centers you'll also want to consult. While the future looks bright for the use of lasers in dentistry, for now, you should continue to do your research before deciding if one of these procedures is right for you.

For lots more information on dental lasers and oral health, check out the links on the next page.

What is the dental formula for deciduous teeth?
Is the fluoride in water good for your teeth?
Macrodontia Explained