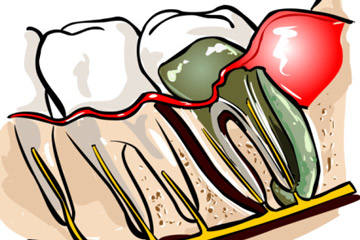 Talk about cavity creeps! A tooth abscess is a sac-load of thick, yellowish-greenish-whitish pus that's full of bacteria.
Hemera/Thinkstock

An abscess is one of the worst things you can have in your mouth, and the human body knows it. Let's just get the graphic details out of the way first: A tooth abscess is a sac-load of thick, yellowish-greenish-whitish pus, and the pus is loaded with bacteria. Our bodies know the bacteria are there, so a natural defense is to create a casing -- the sac -- to keep the bacteria from spreading throughout the body.

Often an abscess forms inside of a tooth and into the root canals, and other times it fills and grows in the gum area at the base of teeth. Whether it forms inside or outside of a tooth, it will almost always hurt -- a lot -- from the constant pressure of the swelling and it will need to be drained and cleaned. Sometimes, openings through the teeth or through small breaks in the mouth tissues in the area around an abscess will develop where some pus will leak out on its own, but this slow-drain site -- called a fistula -- is not enough to rid the mouth and body of the infection [sources: ADA; Alan; CUCDM].

Rupturing an abscess all at once is an effective way to clear out the bulk of the gunk inside, but that's only the first step in getting rid of it. Ideally, an abscess should be incised by a dental professional, but sometimes the abscess will rupture spontaneously. When a tire on an automobile is over-inflated, something that normally it could just roll over, such as a small, sharp rock, may cause it to blow when stretched beyond its capacity. A mouth abscess is similar, and a particle of food that would normally be broken down in the mouth will poke the abscess and cause it to puncture, sending infected pus throughout the mouth. Or, the swelling may just cause it to rupture on its own.

But when ruptured in a controlled environment with a dentist, an endodontist (root specialist) or other professional, pain relievers and infection control agents can help contain and inhibit the spread of bacteria. And it will be more comfortable than having an unexpected and startling explosion in your mouth.

After reading about what an abscess is, you probably want to know how to avoid getting one in the first place. An abscess often is the result of poor dental hygiene, but it also can result after trauma to a tooth or teeth. Cracks in the enamel provide openings where bacteria can gather insidiously within the broken tooth, or in the pulp inside the tooth. Most of the time, though, you will feel the pain as the infection swells. Not so swell, at all.

So how can you know when a pain in your mouth may be an abscess, and do you have to see a dentist to take care if it? We'll look at the root causes and telltale symptoms, next. 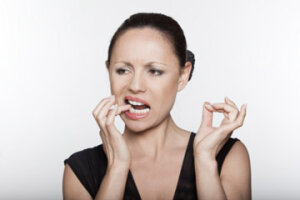 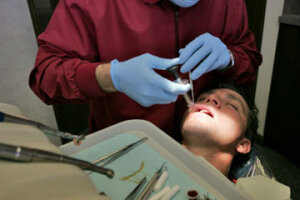 How to Care for an Abscessed Tooth