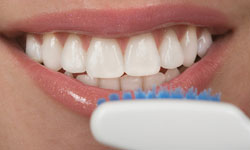 Gingivitis affects almost everyone, but the initial symptoms are so mild that many people don't realize there's anything wrong. So what is gingivitis? It's an oral infection, characterized by tender, swollen gums that bleed easily and have begun to recede from your teeth.

Gingivitis is caused by plaque buildup, and plaque is microscopic wads of bacteria, mucus and food particles that form in your mouth every day and stick to your teeth. In the warm, moist environment of your mouth, the bacteria proliferate and produce toxins that attack and irritate your gums [source: NCBI].

In addition to the physical impact that gingivitis has on your gums, it makes your breath stink, and if you don't get it under control, it develops into a more serious condition called periodontitis, or periodontal (gum) disease. At this stage, the bacteria are underneath the gum, and they attack the soft tissue and bone that support teeth, which can cause tooth loss.

Bacteria from gingivitis can enter your bloodstream and cause additional health effects, including heart disease and lung and respiratory problems. The bacteria also release toxins that can trigger premature labor and delivery and low birth weight in babies [sources: Mayo Clinic, Zamora]. Recent research even connects chronic periodontal disease with the development of Alzheimer's disease [source: Kamer, et al].

To cure gingivitis, you've got to get rid of the plaque. The five habits on the following pages will help you get rid of the condition and keep it from coming back.

Do whitening strips damage your teeth?

How to Get Plaque off Children's Teeth