Is the fluoride in water good for your teeth? 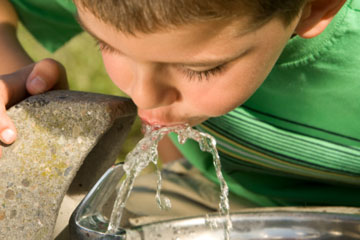 Many consider it to be one of the greatest public health achievements of our time: fluoridated water. Fluoride, a group of natural compounds found in water or added to it at water treatment plants, helps prevent cavities and the eventual decay and loss of teeth. It does this by helping to protect and even rebuild the enamel, or hard covering, on your teeth. When sugars and bacteria wash over your teeth, they decay the enamel, which can lead to cavities.

Grand Rapids, Mich., was the first city to implement community-wide water fluoridation in 1945, after a study released in the early 1940s showed that people who lived in areas with high levels of naturally fluoridated water had fewer incidences of cavities than those who didn't [source: NCI]. As of 2008, 64.3 percent of the U.S. population, or about 195 million people, received fluoride in their drinking water [source: CDC].

There's solid evidence that fluoridating the water is a good thing for your teeth: For one thing, fluoridated water helps reduce tooth decay over a person's lifetime by 25 percent [source: CDC]. And for another, providing fluoride via the municipal water system means that some level of preventative dental care is available to everyone, regardless of socio-economic status and whether they can afford a visit to the dentist. Also, there's an interesting cost-savings benefit: Every dollar invested in adding fluoride to water saves about $38 in potential dental treatment costs [source: CDC].

Currently, the U.S. Public Health Service recommends a range of 0.7 to 0.12 milligrams of fluoride per liter of drinking water [source: CDC]. But recently, after review, the Department of Health and Human Services (HHS) recommended those levels be dropped to 0.7 milligrams per liter, based on the fact that back when water was first being fluoridated, fluoride toothpaste, fluoride rinses and professional fluoride treatments didn't exist. Today's population receives fluoride from so many sources that perhaps less is needed in the water supply.

The new recommendations have prompted people to question whether too much fluoride may be bad for you. According to the Centers for Disease Control and Prevention, children are more likely to be affected by too much fluoride because their teeth are still developing. In children age 8 and younger, overexposure to fluoride can cause pitting in tooth enamel. Adults, on the other hand, have fully formed teeth. But if they're overexposed to fluoride during their lifetimes, they can develop increased potential for bone fractures, or pain and tenderness in the bone [source: CDC].

Fluoridated water is not without controversy. Keep reading to find out why some people oppose fluoride in the water supply.

Not everybody believes fluoride is good for the community. In fact, some people believe that fluoride is a carcinogen. But before we get into the health controversies about fluoride, we should point out that the National Cancer Institute (NCI) has taken a formal stance on the matter: After numerous studies and research, NCI finds no proof of increased cancer risk associated with fluoridated water [source: NCI]. Also, a 1999 report by the Centers for Disease Control and Prevention (CDC) reported "no credible evidence" that fluoridated water causes cancer [source: NCI].

Much of the anti-fluoride movement banks on a study done on rats in 1987. Two Boston researchers found that, after adding fluoride to lab rats' drinking water, some curious things happened: Female rats that happened to be pregnant gave birth to "hyperactive" babies. When the baby rats were given fluoridated water, they exhibited signs of cognitive disorders. It's important to note that the rats were given a higher fluoride concentration than most people receive in their drinking water -- five parts per million (ppm) per the normal one ppm. However, advocates of the research point out that much of the population also ingests more fluoride than what's in the drinking water -- for example, some athletes and children take fluoride supplements [source: Bryson].

Some chemists argue that fluoride is as toxic as arsenic at the one ppm concentration [source: Mercola]. They also point out that the warnings on the back of a tube of fluoride toothpaste recommend calling poison control if a child swallows more than a pea-sized amount of toothpaste. And yet, they argue, a child drinks several glasses of fluoridated water a day.

In the past, fluoride was also used to decrease thyroid function -- as a treatment for people with overactive thyroid glands -- which brings up the question of whether ingesting the fluoride in water leads to an underactive thyroid. Scientists are working to find an answer.

Opponents of fluoridated drinking water advise against using tap water to make infant formula and recommend using non-fluoridated bottled water instead. Of course, the only person that can make these decisions is you. Your best bet is to stay educated, and no matter what, remember to brush and floss every single day.

For more about oral hygiene, check out the links on the next page.