How to Whiten Your Teeth at Home 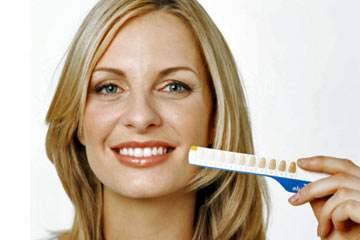 Teeth whitening was the No. 1 most requested cosmetic service in America according to a 2011 survey by the American Academy of Cosmetic Dentistry.
Digital Vision/Thinkstock

We're not born with white teeth.

That might come as a shock to many, because it seems that we spend much of our adult lives trying to "get back" to the blindingly snowy smiles of our youth. In fact, teeth whitening was the No. 1 most requested cosmetic service in America according to a 2011 survey by the American Academy of Cosmetic Dentistry. Yet the fact is that most of us are born with ivory-colored teeth, or a shade known as A2 in dentist-speak -- and A2 teeth are actually seven shades away from pure white, which is designated as B1.

Thanks, in large part, to celebrities who bleach their teeth to artificial whiteness levels (well beyond B1) and then beam their bright whites at us from the silver screen, snow-white smiles are now all the rage -- with people shelling out $1.4 billion in 2006 alone for whitening procedures [source: Mapes].

But beyond celebrity emulation, there also seems to be something hard-wired into us that appreciates a clean and appealing smile. Once again, according to the American Academy of Cosmetic Dentistry: Pretty much all adults (99.7 percent of them at any rate) believe a smile is important as a social asset; 96 percent feel that dingy teeth make you less attractive to the opposite sex; and 74 percent think a sour smile can hurt your chances of having a successful career.

If you feel it's time to turn up the whiteness factor of your teeth, one option would be to seek out procedures -- like laser whitening -- that are done in the dentist's office and range between $500 and $1,000. Another option would be to ask your dentist to set you up with an at-home whitening system (such as a tray and gel), which would take a little longer and cost anywhere from approximately $200 to $500.

But if you're looking to get a million-dollar smile for a lot less than that, there are several at-home options that might just be for you, as we'll discuss next.

In general, at-home whitening procedures are quite safe, with the most reported side-effect being increased tooth sensitivity -- something that fades with time.

The main ingredient in most whitening gels and strips is hydrogen peroxide or carbamide peroxide (a substance that decomposes to release hydrogen peroxide), and research shows that neither chemical does permanent damage to the enamel of the tooth. However, there is at least one study that shows that the tooth's enamel -- the hardest substance in the human body -- can be weakened very slightly (just 1 to 2 nanometers) through whitening treatments and so, caution is recommended regarding the frequency and duration of treatments [source: Ohio State University].

It is also suggested that three groups of individuals avoid whitening procedures: those who have teeth that became grayish as a result of childhood antibiotic intake; those with teeth that are extremely sensitive to cold; and those who have front teeth with crowns or fillings, as these won't respond to whitening treatments and will instead look like blemishes on the teeth [source: Good Housekeeping]. 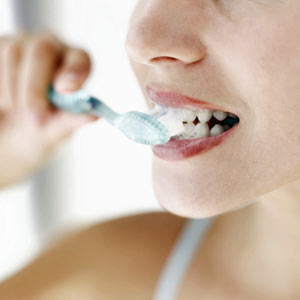 Whitening toothpastes are effective at removing surface stains, not actually changing the color of the dentin that gives our teeth their hue.
Stockbyte/Thinkstock

There are two types of whitening products you can use at home, those that actually "bleach" the teeth by penetrating the transparent enamel and lightening the layer underneath, or those that remove surface stains.

The efficacy of both types of treatment will depend on in what manner and how deeply your teeth are stained, but generally a good rule to keep in mind is that the longer the whitener stays in contact with your teeth, the better the results will be.

For this reason, whitening mouthwashes tend to be the least effective of all at-home treatments, although as a part of an overall whitening plan, they certainly can't hurt.

Whitening toothpastes are more effective than both mouthwash and gum at removing stains from teeth -- especially if you follow the American Dental Association's recommended guideline of brushing for two minutes twice a day. But it's important to note that toothpastes are effective at lightening or removing surface stains, not actually changing the color of the dentin that lies beneath the enamel and gives our teeth their characteristic hue.

Whitening toothpastes work either through gentle abrasives or through the use of chemicals such as sodium tripolyphosphate that help break down stains. It typically takes about two to four weeks for whitening toothpastes to take effect when they're used twice daily for two minutes. However, there is research showing that a chemical known as blue covarine can make teeth look instantly whiter by adhering to teeth and creating an optical illusion that makes them seem less yellow [source: Carr]. It's only available in Closeup White Now toothpaste, and not yet in the U.S. as of this writing. But buyer beware: Like any new product, it seems to be getting mixed reviews -- some users rave about its whitening abilities, while others, well, aren't so happy with their results.

The most effective at-home whitening treatments come in the form of paint-on whiteners, strips and trays that make use of hydrogen peroxide or carbamide peroxide. They work because they allow the hydrogen peroxide to penetrate the porous enamel of the teeth where it works on the dentin, using its free radicals to form molecules that reflect less light and make teeth appear whiter to the eye.

Paint-on whiteners allow you apply a hydrogen peroxide solution to specific stains on specific teeth. So if your teeth are mostly white and you just have a few blemishes, this might be a good choice for you. It also is a viable solution for individuals with sensitive teeth. However, because nothing prevents your saliva from washing away the solution once you close your mouth, these types of treatments tend to be the least effective in this category.

Trays and strips however, provide you the most at-home whitening power. That's because they leave the hydrogen peroxide against your teeth the longest and they both form barriers that prevent saliva from interfering with the whitening process. Using strips or trays filled with a whitening gel for 30 minutes a day for at least a week can whiten teeth five or more shades [source: Good Housekeeping]. To get the most wonderful white from these products, try to look for strips and tray/gel kits that have the highest concentrations of hydrogen peroxide. As a general guide, dentist-prescribed solutions typically contain 15 to 38 percent hydrogen peroxide, while at-home concentrations can range from 3 to 15 percent [source: ADA Council on Scientific Affairs].

When considering a tray and gel system, be aware of the fact that over-the-counter trays may not fit your mouth correctly and could lead to gum irritation. If you are unable to find one that works for you, you might want to ask your dentist to create a custom-molded tray that you can fill with a gel purchased on your own. 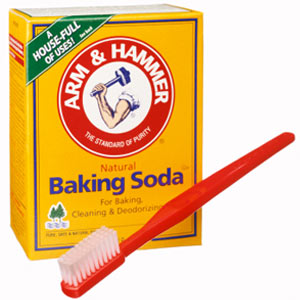 Brushing with baking soda can actually help make your teeth whiter because it bombards them with free radicals that penetrate the enamel.
©iStockphoto.com/evemilla

Does the idea of getting whiter teeth by putting chemicals called carbamide peroxide, sodium hexametaphosphate or blue covarine into your mouth make you turn white with fear? Don't worry; there are other more natural methods you can try to get your whites more pearly.

As you no doubt noticed several years ago, toothpastes started incorporating baking soda into their formulas. That's because it actually can help make your teeth whiter. It works in much the same way as hydrogen peroxide does -- it bombards your teeth with free radicals that penetrate the enamel and basically turn dark stain molecules clear to whiten the teeth. To use it, just dampen your toothbrush and dip it into a small dash of the baking soda then brush for two minutes.

To make the baking soda trick work even better, grind up some strawberries and toss them into the mix. Strawberries contain malic acid that can lighten stains from soda, coffee and wine through its astringency. To put strawberry's whitening power to work for you, crush one ripe berry and mix it with a half teaspoon of baking soda then spread on teeth and leave for five minutes. Then brush it off and get ready to gleam (at least a little more than when you started).

Other food-based solutions include apples, fresh green beans, celery, jicama, carrots, raw cauliflower, broccoli and pretty much any hard vegetable or fruit because their texture can help scrub the teeth and also give the gums a gentle massage.

Finally, it makes sense to keep a glass of water close by at every meal. When you are finished eating, swish a bit around and spit -- just like if you were at the dentist's office. This is an especially good idea if you eat or drink a staining substance like tea or coffee.

Do whitening strips damage your teeth?
How to Whiten Teeth with Braces
Do DIY tooth polishers really work?

Why do I have black gums?
Should everyone use fluoride toothpaste?
Can toothpaste reverse gingivitis?