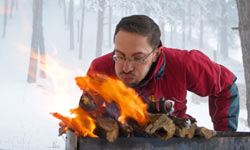 Cookouts can be a fun way for family and friends to spend time together, but make sure to use some common sense.
Hemera/Thinkstock

The barbeque is a great American tradition. So too, apparently, is messing it up to the point where folks risk life, limb and property (not to mention dinner). You're almost guaranteed to find a few cookout-related entries each year among the Darwin Awards' "winners" -- those darkly humorous honors given to the remarkably creative ways some people help strengthen the gene pool by thinning the human herd.

Between 2005 and 2009, U.S. fire departments responded to an average of 8,200 home fires involving grills, hibachi or barbecues each year -- including an average of 3,400 structure fires and 4,800 outside fires, resulting in $75 million in direct property damage [source: NFPA].

In 2009 alone, according to the Consumer Product Safety Commission, nearly 18,000 people found themselves in a hospital emergency room with burns and blisters suffered in grilling-related accidents [source: Aleccia]. Some injuries were minor, but others were fatal, which underscores the importance of barbecue safety.

Don't believe the statistics? Just ask any firefighter, or ER doctor or nurse, and you're bound to get a slew of sordid tales of would-be chefs getting scorched -- or worse. That's what we did, checking in with Lt. Hank Balch, a 24-year veteran firefighter with the Manchester, N.H., Fire Department.

"I could write a book called, 'Is that how dumb human beings are?' or become a stand-up comedian," says Balch, 55. "I'd have enough material to last me the rest of my life."

Given Manchester's multicultural mix, with a large immigrant population, Balch says he's seen a mind-boggling array of barbecue-related mishaps, especially among residents who either didn't know any better or were too inebriated to make responsible decisions. Unfortunately, a number would easily qualify for the Darwin Awards, though it's difficult to make light of such dangerous situations.

Are you grilling under the influence?