Your Office Job as Dangerous on the Body as Smoking? 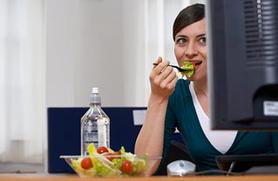 Is sitting down at work all day really as bad as smoking?
Martin Poole/Thinkstock

It's a big part of so many of our lives. Even if we are active outside of work, whether it be by hitting the gym, hiking, biking, practicing yoga, or whatever your favorite hobby, much of our day is spent behind a desk typing away at our computers. I know I spend much of my day churning away at my laptop. Well, it turns out sitting can be lethal. We've heard about this before. Matt wrote a while back about how sitting can lead to early death, but new research points to the fact that it may be as bad as lighting up.

On the next page, discover what the most recent studies said about sitting down all day.

New studies are highlighting increased risks of a host of diseases including heart disease, obesity, diabetes, and cancer. These new studies are more accurate than past studies because they depend on firsthand versus secondhand research. That means that researchers study people in a lab. All eating and exercise is documented in the lab rather than by asking participants questions later. This way participants have no room to fudge if they don't remember or are embarrassed of their activities. One study tool, hilariously named Dr. Levine's Magic Underwear, is a pair of shorts which resemble biker shorts. These 'magic underwear' record all movements, conscious or unconscious taken by a study participant.

The findings were unexpected. Exercise is not an anecdote to sitting too much. Your body in a chair is lethal to your health. As your muscles silence you're at risk for a number of ailments. A story in the New York Times outlines what happens:

"Your calorie-burning rate immediately plunges to about one per minute, a third of what it would be if you got up and walked. Insulin effectiveness drops within a single day, and the risk of developing Type 2 diabetes rises. So does the risk of being obese. The enzymes responsible for breaking down lipids and triglycerides — for 'vacuuming up fat out of the bloodstream,' as Marc Hamilton, an inactivity researcher at the Pennington Biomedical Research Center puts it — plunge, which in turn causes the levels of good (HDL) cholesterol to fall.

These risks are so immediate in fact, that they may equal the risks of smoking. According to Health Watch:

"Smoking certainly is a major cardiovascular risk factor and sitting can be equivalent in many cases," explained Dr. David Coven, cardiologist with St. Luke's-Roosevelt Hospital Center in New York.

The key is to train yourself to include movement in your daily life. Take the stairs, get a standing desk, visit office mates instead of calling or emailing. I like to do a yoga pose or two every hour just to keep my circulation moving. But whatever you do, get moving.

"Excessive sitting," Dr. James Levine, a researcher at the Mayo Clinic in Rochester, Minn., says, "is a lethal activity."

Will you gain weight if you eat after 8 p.m.?
Could alcohol, caffeine, nicotine or street drugs be raising my blood pressure?
Thrush Mouth in Adults