by Rebecca Fairley Raney
Prev NEXT
3

It is possible to overdose on nicotine. 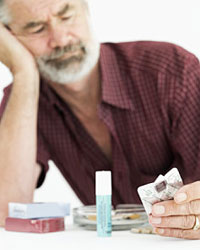 Be careful when combining cessation drugs or nicotine replacement with cigarettes -- it's possible to overdose on nicotine.
Stockbyte/Getty Images

If you read the packages that come with nicotine patches and gum, they'll tell you unequivocally not to smoke while you're using these products.

However, in recent years, researchers have studied people who were given the patch while still smoking, and in general, the studies found that smokers who started the patch before quitting were more likely to quit than those who didn't replace the nicotine before quitting. It's certainly worth mentioning that these smokers were kept under routine supervision of doctors and medical teams during the trials [source: American Cancer Society].

If you quit while using the patch, and you just can't avoid a real cigarette now and then, you'll probably be OK, but you need to watch for signs of nicotine overdose. Those symptoms include anything from nausea and rapid heartbeat to seizures, cold sweats, tremors and confusion. The American Cancer Society recommends that you call the Poison Control Center if you suspect an overdose.