by Rebecca Fairley Raney
Prev NEXT
9 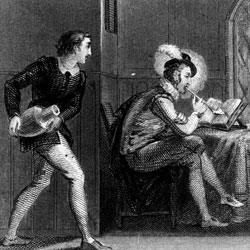 This engraving depicts the tale of Sir Walter Raleigh's servant dousing him with water, thinking Raleigh is on fire as he smokes a pipe.
Hulton Archive/Getty Images

Any telling of the history of smoking is not complete without the "ale-in-the-face" story from Elizabethan times. The story is usually told about Sir Walter Raleigh, the figure widely credited with introducing smoking to England. In the story, he has settled down in front of a fire with a pipe, and his servant was so alarmed at the sight that he threw a tankard of ale at his master because he thought the knight's face was on fire.

It's a charming story, but it's probably not true.

Historians report a vast diversity of "ale-in-the-face" stories set in different historical sites and attributed to different historical figures. The story was much repeated in literature and theater in the late 1500s. With so many retellings, it has the feel of urban legend.

But it's worth considering why the Elizabethans got such a kick out of the story. To them, the sight of a smoking man had to be pretty strange, considering that they had never seen anyone set a fire quite so close to his face before.