by Rebecca Fairley Raney
Prev NEXT
7

In some tribes, pipes were the only nonessential objects carried. 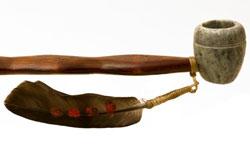 In some Native American tribes, the tobacco pipe was a vital part of diplomacy and trade.
iStockphoto/Thinkstock

You might think of the tribes of the North American plains as fast and efficient. They only made room in their lives and their traveling packs for things they absolutely needed. The archeological record shows that the tobacco pipe was one of those things -- and that it was the only object carried that had no direct role in day-to-day survival.

In fact, tribes that never grew vegetables took time out from hunting to cultivate tobacco.

The presence of the pipe among all the tribes played no small part in diplomacy and trade; indeed, some historians argue that negotiations among tribes would have been impossible without the ceremony of smoking.