by Rebecca Fairley Raney
Prev NEXT
3

Smoking and Suffrage: The Torch of Freedom 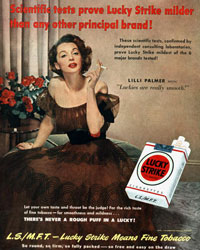 To entice women to smoke, Lucky Strike filled its ads with elegant actresses like Lilli Palmer and phrases like, "There's never a rough puff in a Lucky!"
Apic/Hulton Archive/Getty Images

The retreat of the men after dinner to the smoking room became a hallmark of Victorian times. This habit was largely instigated in the United States by the onset of the cigar, which throughout history has remained largely a male preserve in smoking.

Just like in Elizabethan times, smoking became dangerous to the social order. When women infringe upon a traditional male activity, it gets to be a problem.

Well, it appears that women were eager to start this kind of trouble about the same time as the cigarette entered the mass market. This was a product that women were welcome to consume. In fact, it was marketed to women as the "torch of freedom" and a tool by which they could overcome silly prejudices. In 1929, one cigarette manufacturer recruited 10 New York debutantes to walk down Fifth Avenue smoking Lucky Strikes. In the late '20s, when the Lucky Strike became the torch of freedom, sales tripled within three years.

And liberated women simply had to smoke.