Do ads really get kids to start smoking? 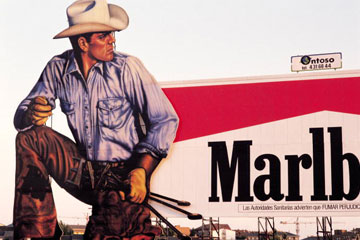 Conversations about smoking as a public health problem often gravitate toward the topic of tobacco advertising, especially when the discussion focuses on kids and cigarette ads. The subject was a very visible point in the states-versus-big-tobacco lawsuits of the late 1990s, as plaintiffs argued that tobacco ads not only encouraged more people to smoke, but also specifically encouraged children to take up cigarettes.

Do tobacco ads really cause kids to start smoking? Were characters like the Marlboro Man and Joe Camel designed to target children, rather than the adults the tobacco companies claimed they intended to reach with their ads? The answer isn't so simple.

Research studies can give us a sense of the power of tobacco ads, as well as the complexity of linking them to underage smoking. A survey published in February 2011 noted that several countries saw their population-wide smoking rates drop after they banned tobacco ads. That same study, however, noted that milder restrictions, such as limiting how close outdoor tobacco ads can be to schools, had little effect on underage smoking. The study noted that, even at a young age, children often have the reasoning and memory to retain catchy ads -- in essence, the message from one effective tobacco ad can stay with a child long after he or she sees it [source: Willemsen].

The power of tobacco ads is clear, but a murkier question is whether companies specifically targeted their ads at children and young teens. Testimony to both sides of that argument was heard in abundance during the tobacco trials of the 1990s. But a key point makes the planned intent of tobacco ads irrelevant: Adolescents may view ads designed to target adults and be more receptive to them simply because of their age. Teens, due to a number of factors, could be predisposed to be the perfect targets of tobacco advertising. Read on to learn more.

Think about popular tobacco ads of the past, such as the Marlboro Man. A rugged, handsome character stands in a breathtaking landscape, cigarette dangling casually from his lips. In the scene, we have seen the results of his day's hard work: a herd of corralled cattle, or perhaps a campsite set up as the sun was setting. An image like this is attractive to adults looking for an escape from their office jobs and cubicles. But the same type of ad could be nearly irresistible to a teenager.

Teens want to be cool; it's in their hormones. The period of adolescence is marked by an extreme sensitivity to peer opinions. This makes sense: The years between childhood and adulthood are the time when humans transition from helplessness and dependence on parents to independence and the ability to make decisions for themselves. It's a difficult time filled with anxiety and uncertainty, and many teens look to their friends, as well as media influences, to gain a sense of right and wrong, effective and incompetent, and cool and uncool. If the message that smoking is glamorous, acceptable or an exciting break from the norm lands in this sea of confusing desires and messages, it's all too easy for an adolescent to turn the Marlboro Man into a hero, or Joe Camel's cartoon exploits into a desirable realm in which one can escape the pressure of daily life [source: Watson]. This is largely why both characters were banned in the late '90s.

Whether smoking advertisements are targeted at children or not, then, becomes a moot point. Simply projecting the message -- in any form of modern media -- that a brand of cigarettes is glamorous or desirable means the message will likely reach a child or adolescent. And according to research findings, odds are that at least some of those children will absorb the message -- not that one brand of cigarettes is better than another, but that smoking in general is good, and a desirable activity.

For more information on smoking, check out the links on the next page.

Juul 'Make the Switch' Ads Drawing Flak From Anti-tobacco Activists
Why is it so hard to quit smoking?
What state has the highest percentage of teenage smokers?

Is black licorice dangerous?
Bagel, Muffin or Doughnut: Which Is the Best and Worst, Healthwise?
Do DIY tooth polishers really work?