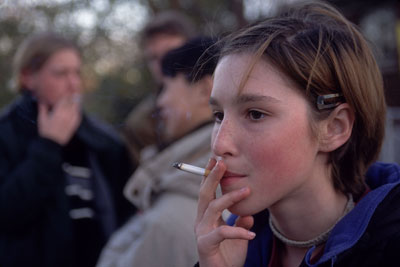 Teen smokers cite the terrible odor and the high costs of cigarettes as their main motivations for quitting.
Steve Liss/Getty Images

We've touched on a few ways cigarette companies have gotten you hooked and aimed to stay hooked. Unfortunately, there are even more factors that make it difficult to kick the habit. One could be your gender.

A 2004 study by the University of Ohio found that hypnosis is more helpful to men than women who are trying to quit smoking. Over the course of 18 studies involving 5,600 participants, the research shows men hold a 7 percent edge over the ladies. That may not sound like much, but when cessation success rates are in the 20 to 30 percent range to begin with, it's a pretty big advantage. This doesn't mean that women are less susceptible to hypnosis -- it may have more to do with overall success rates for women. Research has shown that, if anything, women are more able to be hypnotized. They just have a harder time quitting smoking than men. One reason is that nicotine replacement therapy, like the patch, isn't as effective for women. Another theory is that women may be more concerned about weight gain associated with kicking butts.

Your genetic makeup may also play a part, so you can thank mom and dad. Research from the University of Michigan released in August 2008 indicates that if you have the nicotine receptor gene CHRNA5, you're more likely to enjoy that very first cigarette. Out of 435 smokers and nonsmokers who had tried cigarettes in their life, the ones who kept smoking reported that their first cigarette gave them a pleasurable experience. These same participants were also more likely to have the variant of the CHRNA5 gene. This means that for some people, the first smoke they ever have will make them want to come back for more. How's that for not having a fighting chance?

Another study by the Indiana University School of Medicine shows that some forms of mental illness go hand-in-hand with nicotine addiction. Like peanut butter and jelly, bipolar disorder and cigarettes make a likely pair. Depending on where you're from, the average population of smokers is about 20 to 25 percent -- people with some form of mental illness clock in at about 50 percent. Seventy-five to 90 percent of people who suffer from schizophrenia are smokers. Alcoholics aren't far behind at an average of 80 percent. Bipolar disorder comes in at 60 to 70 percent [source: Rudavsky].

Eight out of every 10 smokers say they wish they'd never started, yet only one in 10 can successfully quit. The good news is that quitting can and does happen all the time to all kinds of people. Some do it by going cold turkey. Some need the help of nicotine replacement therapy (Sharecare.com). Hypnosis works for some folks, and others need more intense prescription medication to help them kick the habit. Two million people quit smoking every year, and there's no reason you can't be one of them. No matter how many years you've smoked, your body will immediately begin to repair itself once you've put out your last butt. It's intimidating, so you might try by cutting back to begin with. A review of smoking studies in people that had no desire to quit showed that cutting down often led to complete cessation [source: Science Daily] .

For more information on smoking and health, please explore the links below.