What organization spends the most on smoking prevention? 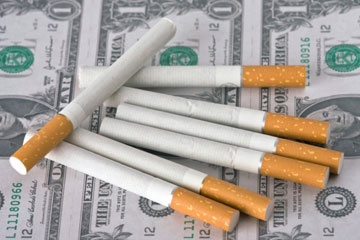 Giving up smoking is no simple task, and tobacco costs the United States billions of dollars in health care bills and lost man hours. In 2008, the Centers for Disease Control and Prevention (CDC) estimated that smoking was costing the country $193 billion every single year. Because of smoking's impact on public health, there are quite a few organizations working to help reduce the number of smokers in the U.S., and some of them spend millions -- or even hundreds of millions -- to do so.

Many smoking prevention campaigns target kids, and there are even entire organizations aimed at keeping teens from smoking. The largest anti-smoking group that targets youth is the Campaign for Tobacco-Free Kids. Of course, with a mission like that, it's safe to assume that most of their budget goes toward tobacco prevention. With other anti-smoking groups, the numbers get a little bit trickier to sort out.

Anti-smoking campaigns can focus either on smoking prevention or smoking cessation (helping smokers quit), and most groups work on a mix of the two. While prevention programs tend to be aimed at teens, there are prevention campaigns out there for adults, as well. Unfortunately, not all anti-smoking organizations are able to break out exactly what they spend specifically on prevention for a couple of reasons. One problem is that large organizations, like the American Lung Association, have chapters across the country that do their own accounting, making it almost impossible to get a total amount for the organization as a whole. The other issue is that smoking prevention and cessation are often closely tied together. Messages about cessation can help with prevention by raising awareness of smoking's dangers. Think about those anti-smoking ads depicting a smoker's lungs next to healthy lungs: That kind of campaign could keep someone from picking up the habit or convince a smoker that it's time to quit.

As part of the Master Settlement Agreement in 1998, tobacco companies agreed to pay $246 billion to states over 25 years to fund anti-smoking campaigns. In 2010, the

Campaign for Tobacco-Free Kids reported that only 2 percent of the money from the settlement and from tobacco taxes was actually going toward prevention and cessation programs. States were really spending close to 30 percent less on anti-smoking campaigns than they were three years before.

But who does spend the most on smoking prevention? Next up, we'll look at some of the numbers.

Anti-smoking Groups By the Numbers

There are a few heavy hitters in the anti-smoking arena, and not all of them have current spending data available. To get an idea of what each group spends on smoking prevention, we'll compare the most recent numbers available from the largest organizations' anti-smoking programs. Not all of these groups were able to break out the numbers to separate smoking prevention programs from cessation, and one was only able to provide a total spent on preventing lung cancer. Despite the somewhat inconsistent reporting, however, there's one organization that clearly spent more than any other on smoking prevention.

The government spends the most money on anti-smoking campaigns, more than twice as much as the next biggest spender. So where does that money go? On top of state-specific programs that receive funding from the Master Settlement Agreement, the federal government promotes smoking prevention through a number of agencies, like Smokefree.gov, the National Institutes of Health, the Centers for Disease Control and Prevention, and the National Cancer Institute. When you look at all of the state and federal programs working to keep Americans from becoming smokers, the government is by far the largest anti-smoking organization in the U.S. and the one that spends the most on smoking prevention.

For more information on smoking prevention, check out the links on the next page.

If we're looking at the non-government anti-smoking organization that spends the most, the Campaign for Tobacco-Free Kids is well ahead of other major anti-smoking groups in spending. Tobacco Free Kids combines education and policy advocation to help keep kids from smoking, and they spend tens of millions each year to do so, raising money mainly through private and corporate donations.