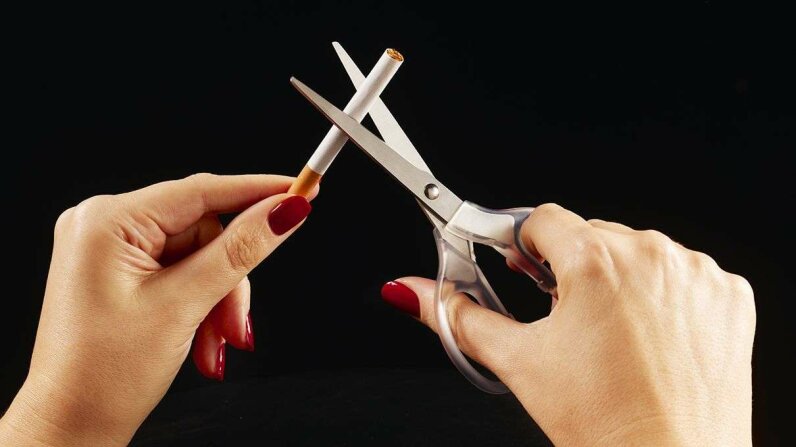 Ladies, here's the bad news: While smoking is terrible for everyone, it affects females in all sorts of disastrous ways. Women who smoke are at greater risk for fertility issues. Female smokers are even more likely than men to die of lung cancer. Smoking during pregnancy causes a host of problems, and cervical cancer risk goes up for smokers.

But if you're a female smoker who wants to quit, know this: Your body may have some biological mechanisms to help you kick the habit. A new study by researchers at the University of Pennsylvania found that females who quit smoking during a certain hormonal phase of their menstrual cycle might have more success than those who don't. Thirty-eight healthy women between the ages of 21 and 51 who weren't on hormonal contraceptives were enrolled in the study.

Their initial findings seem to support the idea that hormones — the punchline of many obnoxious jokes at a female's expense — can be tied to good decision-making. More specifically, progesterone (a hormone that increases after ovulation, and during the premenstrual period) might help women regulate addictive behaviors. Researchers found that women who were in the follicular phase of their period, which takes place after menstruation and before ovulation, showed less connectivity between the brain's reward center and decision-making regions.

So when you do quit, it might be worth trying to time it with your menstrual cycle. When your progesterone is high (after ovulation but before your period), throw those cigarettes in the trash.

Now That's Interesting
While this study looked at female smokers, it also might give us insight into broader categories of addiction. It just may be that progesterone can lead to lower relapse rates for all sorts of bad habits. So maybe try to go cold-turkey from soda or even stop biting those fingernails during your luteal phase for a possible hormonal boost of success.