What state has the highest percentage of teenage smokers? 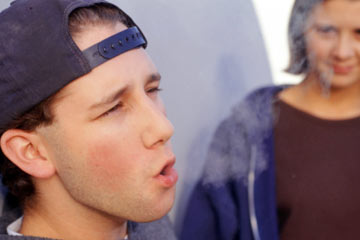 There's no denying that teen smoking is a problem in the United States. According to surveys conducted by the U.S. Department of Health and Human Services during 2007 and 2008, 9.46 percent of American teens were smokers [source: Hughes]. But depending on what part of the country you live in, teen smoking may be more or less prevalent. By region, the Midwest and the South lead the country in teen smokers, with 10.95 and 9.95 percent, respectively. The West, with 7.83 percent teen smokers, does a little better [source: Hughes].

That data comes from the National Survey on Drug Use and Health (NSDUH), a continuing project that surveys American households in all 50 states and Washington, D.C. To provide a little context, the study defines a teen as between the ages of 12 and 17, and defines a smoker as someone who has smoked at least one cigarette in the past month. So which state has the highest frequency of teens lighting up? That dubious distinction goes to the state of Kentucky, where 14.47 percent of teenagers smoked at the time of the survey [source: Hughes]. By comparison, 47 percent of adults 18 to 25 were cigarette smokers in Kentucky during the same period, and 32 percent of adults over the age of 25 [source: Hughes]. Kentucky led the nation in both of those age categories, as well.

Arkansas landed in second place (or 49th place, depending on how you look at it). Slightly more than 13 percent of teens in Arkansas smoked in 2008. Next were Wyoming and West Virginia, which both had a 12.94 percent teen smoking rate, and then Oklahoma, which had a rate of 12.11 percent. As for the state with the lowest percentage of teen smokers, that would be Utah, where just 5.77 percent of teens smoked. Following closely behind were California, with a 6.63 percent teen smoking rate, Hawaii, with 6.88 percent, and Washington, D.C., with 6.92 percent [source: Hughes].

On the bright side, teen smoking in the United States is actually on the decline. All but one of the states named above have had declines in the level of smoking teens when you compare the data from 2007-2008 with the 2005-2006 data. The one exception is Hawaii, where teen smoking increased, but only by eight hundredths of a percent [source: Hughes]. So why do some states have higher teen smoking rates than others? Read on to learn more.

Why do some states have more teen smokers?

A 2010 report by the Centers for Disease Control and Prevention uses the numbers from the NSDUH survey to discuss why teen smoking is high in certain states, and how it can be combated. It's worth pointing out that this report goes off of the 2006-2007 survey, the most recent set of data available at the time it was written. While each state's numbers are slightly different, the overall trends were about the same.

One possible explanation links high rates of teen smoking with lower excise taxes on cigarettes. The idea is that higher taxes deter people from smoking, especially younger people, who usually don't have much disposable income. Specifically, cigarette taxes in Kentucky and Wyoming are less than 60 cents per pack [source: Centers for Disease Control and Prevention]. That brings the total price for a pack of cigarettes to around $3.70 [source: Boonn]. Cigarette taxes in states with fewer teen smokers were often higher, by comparison. For example, just the taxes in D.C. add $2.50 per pack, and in Hawaii, they add $2.60 per pack, making cigarettes very costly in these states, between $4.65 and $5.85 each [sources: Centers for Disease Control and Prevention, Boonn].

Another statistic that has a close relationship with the number of teen smokers is the percentage of homes in a given state where strong "no smoking" rules are established by parents. In Kentucky, 60.9 percent of homes have such a rule. This might seem high, but it's actually the lowest in the nation. In Utah, the state with the lowest rate of teen smoking, a full 90.6 percent of households have a "no smoking" rule. Nationally, the statistic falls in between on average, at 77.6 percent [source: Centers for Disease Control and Prevention]. Those figures are based on surveys of households in all 50 states, in which parents were asked whether they have rules forbidding children to smoke in the house.

States with more smokers also tend to have fewer laws regulating smoking in public places. Kentucky does not have any public smoking bans on the books, for workplaces, restaurants or bars. Other states with high rates of teen smoking, like Wyoming, Oklahoma and West Virginia, also lack public bans. States like Ohio and Montana, on the other hand, have enacted public smoking bans, but still have high instances of teen smoking [source: Centers for Disease Control and Prevention]. So, you can't necessarily draw a connection in every case.

Still, the statistics make a strong case that the more efforts state governments and parents make to discourage smoking among teens, the less teen smoking a given state will have.

Which brands do teen smokers prefer?

Teenagers have strong opinions on just about everything, and smoking is no exception. A survey conducted in 2006 by the Centers for Disease Control and Prevention found that 52.3 percent of U.S. teen smokers between 12 and 17 years of age preferred smoking Marlboro, and 21.4 percent preferred Newport. The study suggested that advertising plays a huge role in teens' decision to smoke: Along with Camel, Newport and Marlboro were the most widely advertised cigarette brands over the course of the previous year [source: Morbidity and Mortality Weekly Report].