Is cryotherapy the next big thing in spas? 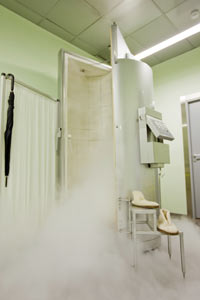 Did you ever think that you could be frozen into better health? While you might think that exposing your body extreme temperatures of any kind is a recipe for disaster, placing yourself in freezing conditions actually may improve your overall fitness and well-being. Cryotherapy, a rather unusual treatment that is sweeping the spa world, exposes spa-goers to subzero temperatures in an effort to relieve pain and improve health. Gone are the days of putting a bag of frozen peas or an icepack on a sore joint; cryotherapy is the next new thing.

In a cryotherapy session, you wear a protective bathing suit, socks, gloves, and mouth and ear gear to guard against frostbite. You are guided through a series of increasingly frigid chambers filled with nitrogen where you stay for a few seconds to a few minutes. The cold temperature rapidly cools surface capillaries and pushes more blood and oxygen through your system.

When you return to normal temperatures, your blood vessels expand which promotes healing. You also feel a relief in pain because of the released endorphins in your body. Other benefits include reductions in stress, inflammation, swelling, insomnia and muscle and joint pain. Cryotherapy clients also report a decrease in the duration of migraines.

Even though cryotherapy sounds like something out of a science fiction novel, the treatment is not new. Exposing your body to cold temperatures in order to reduce pain dates back to ancient times, but cryotherapy treatment as we know it today began in Japan in the 1970s. It quickly gained popularity in Europe, but it didn't catch on in the U.S. until recent years.

Many new cryotherapy spas are opening across the country, and elite athletes are advocating this craze. For instance, the world-famous basketball team the Los Angeles. Lakers has tried cryotherapy to enhance their performance on the court. In an effort to ward off fatigue from back- to- back games in a shortened 66-game season in 2011, the Lakers traveled to a cryotherapy spa in Sacramento, Calif. The players were placed in a room with a temperature of 60 degrees Fahrenheit below (-51 degrees Celsius) for one minute. After that, they walked into an adjacent room that had a temperature of 200 degrees below (-129 Celsius) for three minutes. Makes the traditional ice bath favored by athletes seem like child's play, right? Even though they didn't win their next game, the players reported decreased muscle soreness.

The jury is still out regarding hard scientific support for this therapy, and more studies are needed to find medical evidence to verify it as a successful treatment for pain relief; however, television personality and health expert Dr. Oz recently endorsed it as an alternative therapy for pain management.