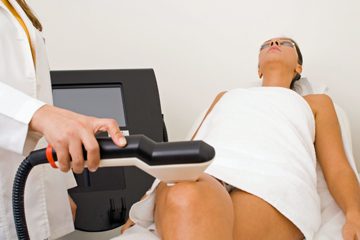 Are the results really worth the money?
iStockphoto/Thinkstock

If you're a woman, you probably have cellulite somewhere on your body. Although it's considered an unsightly affliction, cellulite isn't a medical condition. It occurs in about 90 percent of women. [source: Harmon]

Here's how cellulite works: At puberty and sometimes in middle age, hormone changes cause women to start storing more fat in their lower bodies. As fat begins to accumulate in key areas, it puts stress on adjacent connective tissues that tug on the skin like rubber bands, causing dimpling. If there's a lot of fat accumulation involved, or the skin is thin, the dimpling is somewhat more noticeable.

Cellulite is an inherited trait, so if your mother or an aunt has it, you're likely to have problems with it too. For the most part, cellulite isn't a symptom of overindulgence. You aren't being punished for a brownie eating marathon back when you were still in braces. It isn't necessarily weight related, either. Thin women have cellulite. Dimpling is common on the thighs of cellulite sufferers, but it can also occur on the buttocks, lower abdomen, hips and arms. It can be exacerbated by factors like fluid retention, poor circulation and lack of exercise, and may become more noticeable after menopause.

From minor dimpling only when the skin is pinched to obvious dimpling even when lying down, the more pronounced the skin distortions from cellulite are, the harder they are to eliminate. Even a minor distribution of cellulite can be difficult to treat successfully, though. Sometimes the cottage cheese texture will diminish somewhat using one therapy or another only to come back a few months after treatment is discontinued.

Some potential therapies are still being evaluated for safety and effectiveness, while others haven't been seriously evaluated at all. The U.S. Food and Drug Administration is currently fine tuning its guidelines for cosmeceuticals, products marketed as cosmetic-pharmaceuticals. Some cellulite preparations and treatments fall into this category. That's one reason the effectiveness claims for cellulite preparations and technologies, especially those offering spectacular results, should be approached with caution and some healthy skepticism. [source: Edney]

On the next page, let's take a look at the most popular cellulite treatments on the market. Some aren't worth your money, while others may promise - or at least hint at -- the bump battling results you're looking for.

Men do get cellulite, but in much smaller numbers than women. The connective tissues corralling fat on a man's body occur in a crosshatched pattern that's more effective at providing strong support than the narrow, straight strands under a woman's skin. Only about 10 percent of men show the characteristic dimpling and orange peel (or cottage cheese) skin texture associated with cellulite. [source: Harmon]

If you've ever taken a look at Peter Paul Rubens' painting the "Three Graces," you know that cellulite has been around a while. Those classy ladies looked like they were having a good time despite a few physical imperfections. There's a lesson in there somewhere.

Cellulite treatments fall into a few broad categories. Some can be performed at home, while others must be administered by a licensed technician or dermatologist. Some, like ointments, work from the outside (noninvasive), while others are applied under the skin using surgical procedures. They approach cellulite on a number of fronts to do one or more of the following things believed to reduce the appearance of dimples and bumps:

Creams and ointments - If you want a fast, painless and convenient way to combat orange peel skin, applying a topical cream is probably it. American consumers spent over $13 million on cellulite creams in 2011, and creams are among the oldest known treatments for cellulite. You typically have to use a cream for months to see any results, and after you stop using it, problems with dimpled skin will often come back. [source: Krieger]

Some of the most popular creams use phosphodiesterase inhibitors or methylxanthines like caffeine to dehydrate fat cells and break down fat. This sounds pretty neat, but the clinical results aren't all that stellar. Some experts contend that topical application probably isn't a very effective delivery method. The jury is still out, though. Other popular creams use retinol to help build collagen and toughen connective tissues to make them thicker and stronger.

There are also dozens of herbal creams for cellulite on the market. Most haven't been tested by independent labs. If you want to try one or two, take a buyer beware approach and avoid products that promise unrealistic results.

Does using a body brush daily help with cellulite?
Will fasting get rid of cellulite?
Boost Your Skin With Firming and Lifting Moisturizers

10 Myths About Sugar
CNN's Sanjay Gupta on How Marijuana Can Break Opioid Addiction
What’s safe to pack in your unrefrigerated lunch?