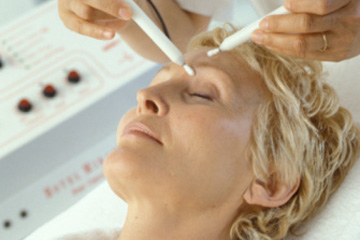 Do you have embarrassing hair growth where you don't want it? You're not alone — up to 90 percent of us are bothered by this age-old beauty problem that is often blamed on heredity or hormones.

For women, the most aggravating areas where unwanted hair growth occurs are the face, legs, underarms, breasts and bikini line. Some men need help with an excessively hairy back, neck and chest.

Stubble and ingrown hairs can come with shaving or tweezing. The other at-home options — removing hair using hardened wax or a depilatory — can be tough on sensitive skin and last just a couple of weeks. Moreover, it is usually recommended that they be applied by a professional.

To get that smooth, hair-free feeling that lasts longer, it's takes energy — of the electrical or laser variety.

Either way, remember: Hair grows, sheds and replaces itself in cycles of varying length. Dormant follicles can sprout months, or years, later.

Electrolysis is a 125-year-old process using low-level current to destroy follicles, one-by-one. A sterile probe is inserted, a current generated and the loosened hair removed. There may be a slight reddening and/or swelling and small scabs may occur. Treatment intervals vary, and it can't be used inside the nose and ear.

Lasers (approved for hair removal in 1995) and intense pulsed-light devices, sometimes called laser equivalents, use thermal energy to destroy follicles. Lasers treat larger areas, but may be ineffective on white and light blonde hairs and tanned skin. Only two lasers are approved for very dark skin.

A prescription anesthetic may be applied beforehand, compresses and gel afterward. Skin is pink to red, sometimes swollen, for up to a few days. Pigmentation changes may occur, but almost always fade. Skin may crust. Hairs can take up to two weeks to fall out. New growth may be lighter. Treatments are 4-6 weeks apart, and the eye area should be avoided.

But some, like Westwood, N.J., dermatologist Dr. David Goldberg, believe there's room for both.

"For people with small areas, frankly, electrolysis done well is a good procedure that costs a lot less. But for larger areas, it's foolish not to go to laser hair removal, and it's more cost-effective," says Goldberg, director of Skin Laser and Surgery Specialists of New York and New Jersey, and member of a New Jersey electrology advisory committee.

Also, electrologists brag that some of their machines have government approval to promise permanent hair removal, but lasers can only claim permanent reduction.

"When (laser) meets my standards and the FDA says it provides permanent hair removal and it treats all kinds of hair, I'll put it in my office," says Gior, founder of the International Guild of Professional Electrologists.

The Cost of Hair Removal

Costs vary as widely as the types of hair, concentration and location. Laser treatment of a small to medium area may cost $200 to $700, with four to five treatments needed.

"Many people think they can have one or two treatments and the hair doesn't grow back," says Kathleen Silvassy of Washington, D.C.. "Not so, especially with the thicker varieties found in eyebrows, which I've been working on for at least a couple years now."

Tammy Hammarstedt of suburban Chicago says she's "pretty happy" with the light-pulsed system treatments of her brow, lip, underarm and bikini areas but "it's taking more treatments than they said."

Get referrals from your physician and friends, check the location and remember: The government regulates electrolysis and laser machines, but not their operators.

Lasers must be used under a licensed practitioner's "direction." Depending on the state, the operator could be a doctor, registered nurse or esthetician. Ask about experience. Also, lasers owned outright or under long-term lease indicate commitment and experience.

For electrolysis, make sure one disposable needle is used per patient, and other tools are sterilized by dry heat or autoclave.

"The thing you have to be concerned about today is infection," says Teresa Petricca, The American Electrology Association's executive director. "You dig with forceps for imbedded hairs. Those instruments have got to be sterilized; they are going to get blood on them, otherwise you can transmit a blood-borne disease."

Also, check for an electrology or cosmetology school diploma, a license (required by 32 states) and industry group membership (indicating commitment to national standards).