by Shanna Freeman
Prev NEXT
10

It's Not Just Estrogen 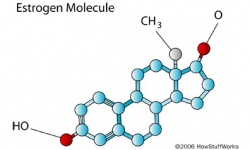 Estrogen is the primary female sex hormone, but it's not the only one.

You hear a lot about estrogen in discussions about women's hormones, and with good reason. Estrogen is the primary female sex hormone -- and it's responsible for a lot of different functions, including the growth of breasts and the maturation of the genitalia during puberty. It's also a big part of the menstrual cycle and influences a number of other functions in the body that have nothing to do with sex (more on that later). However, it's not just about the estrogen.

Progesterone also plays a part in the menstrual cycle, specifically helping to make the uterus suitable for a fertilized embryo. When a woman becomes pregnant, progesterone produced by her placenta helps support the growth of the fetus. The rise and fall of this hormone influences when a woman goes into labor and when she begins lactating. Women also have testosterone (although in lower amounts than men do). Testosterone has a lot to do with their sex drives, and it also influences bone and muscle density.

In addition to these three major hormones, there are even more hormones secreted by the pituitary gland that influence and regulate the menstrual cycle. No wonder things are so complicated.