Women and the Risk of HIV 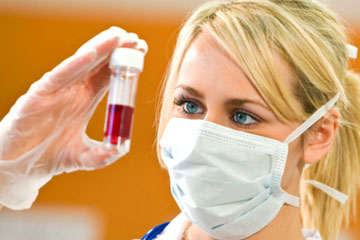 In 1990, when Rebecca Denison learned she had tested positive for HIV, she looked for services for women and didn't find much. Although she lived in the San Francisco area, where AIDS awareness was extremely high, most of the resources she found were targeted to the gay male community, and featured little information about HIV's effect on women.

So she started researching, publicized her findings in a newsletter, and then founded Women Organized to Respond to Life-threatening Diseases (WORLD) to provide practical and factual information to women living with HIV, ranging from treatment options to childbirth and child care issues.

Today the message that women are vulnerable to AIDS is still not widespread in the U.S., where many women believe they are not in a risk category. Yet the human immunodeficiency virus (HIV) that causes the illnesses and infections that make up acquired immune deficiency syndrome (AIDS) is currently the leading cause of death for African-American women aged 25-44 and the sixth-leading cause of death for all American women in this age group. Denison learned about her infection through a test, but many women are not even aware they have HIV until they become ill.

Most women don't even know they have HIV until they get an opportunistic infection, and then they've got full blown AIDS, explained Francess Page, Senior Public Health Advisor at the government's Office of Women's Health. I know so many women who are now dead who didn't have a clue. They thought they weren't in a risk category. Unprotected sex is a major risk for women. But it's also the way that you have babies. Women need to ask a lot more questions of their partners.

Condoms are extremely effective in protecting against the transmission of HIV, and yet the virus is still spreading through unprotected sex. According to the U.S. Centers for Disease Control and Prevention (CDC) most American women with HIV were infected by having unprotected sex with an infected injection drug user, while about one-quarter contracted the virus by sharing needles with an infected injection drug user.

The percentage of AIDS cases among American females has more than tripled in 13 years, from 7 percent in 1985 to 23 percent in 1998. African-American and Hispanic women have been hit hardest, accounting for over three-fourths of the AIDS cases in the U.S. although they account for less than one-fourth of all U.S. women.

Safe sex messages are not really directed at men who have sex with women. Denison said. Many messages put the responsibility on the woman, and let men off the hook. But men need to hear the message that if they care about themselves, and care about others, then they need to use a condom.

She noted that the gay community has done a good job of promoting the use of condoms, with older men teaching younger men about safe sex. That's missing in heterosexual relationships, where heterosexual men feel they're not in a risk category, she said. The risk is also there for monogamous women. People enter into monogamous relationships based on love and trust. But there are too many cases where, as one woman I know says, they may be married, but their husbands are not, Denison observed.

According to CDC, the most common ways HIV is transmitted are through:

Worldwide, vaginal intercourse is the most common way HIV is transmitted. Scientists have explored whether women are more likely to get HIV than a man when directly exposed, but studies show that the risk for direct exposure is the same for males and females. Nevertheless, because women are generally more vulnerable to sexually transmitted diseases than men, they are also more vulnerable to HIV. Anybody who is having unprotected sex should go get tested, Page recommended.

Failure to get tested and failure to receive proper treatment after infection with HIV appear to be the primary reasons women with HIV develop AIDS and die more quickly after diagnosis than men do, says Phyllis Greenberger, Executive Director of the Society for the Advancement of Women's Health Research. She says this encourages the scientific community to look for gender differences in disease.

The presentation of viral load in women is lower, but the immune system for that level of viral load is more damaged, explained Margaret Fischl, M.D., professor of medicine and director of the AIDS Critical Research Program at the University of Miami School of Medicine. The reasons for this is unclear —it's unknown whether it's hormonal or not.

Because women are more likely to get full blown AIDS at a lower viral load than men, many haven';t been treated properly, Greenberger said. Women were not treated as early as they should have been because their diagnosis was made on the level of viral load and the symptoms that males had, and women had different symptoms that were not understood as the precursors of AIDS.

Gynecological problems, ranging from stubborn yeast infections to invasive cervical cancer, are among the signs of AIDS in women that were originally not recognized because they did not appear in men. They have since been added to the list of AIDS indicators.

Often women do not seek care until they have more advanced disease for reasons ranging from improper diagnosis to the stresses of everyday living, observers of the epidemic have found. If her child is sick, a woman is more likely to tend to the child than to herself. She's the last on the totem pole, Fischl said.

Overall survival rate in the U.S. is improving because potent therapies can knock the virus down and the immune system at least partially heals, Fischl explained.

Although this is good news, the CDC is concerned that advances in drug treatment have lulled Americans into a false sense of complacency about HIV/AIDS, noting that while the number of AIDS cases is declining in the U.S., the number of people living with HIV is growing. The HIV epidemic in our country is far from over, CDC reports.

In the U.S., many people are able to live with HIV because they have access to effective drug therapy. But for the most part, people in developing countries cannot afford the necessary drugs, and many are dying. Taking precautions by using condoms, getting tested for HIV, encouraging your partner to get tested, and getting prompt medical care if diagnosed with the virus are important steps every woman can take to protect herself and to keep the epidemic from spreading.

Seventeen years after contracting HIV, Denison is the mother of healthy, HIV-free 4-year-old twins. Her health newsletter for women has 12,000 readers in 85 countries, and she has made it her mission to educate women, and the public about HIV/AIDS. It was a fluke that I found out I have HIV, she said.

"If I could have this, anyone could."

10 Diseases That Used to Be Death Sentences
Does male circumcision up the risk of male-to-female HIV transmission?
5 Things You Don’t Know About HIV