by Charles W. Bryant
Prev NEXT
9 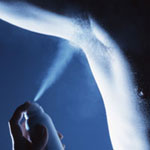 Aerosol deodorant can be dangerous if it's overused in a confined space.
Peter Cade/Getty Images

In 1998, a 16-year-old boy in England passed away from a heart attack after being exposed to too many deodorant fumes. At the time of his death, the BBC claimed that more than 130 people had died after purposely inhaling aerosol deodorant products since 1971, but the boy's death was the only accidental case on record [source: BBC]. It seems that he was obsessed with personal hygiene and smelling fresh, so he'd spray his entire body with deodorant at least two times per day. It got so bad at times that the family of the boy could taste the fumes downstairs. In spite of this, they never thought he was in any danger. An autopsy revealed that he had 10 times the lethal amount of butane and propane in his bloodstream. It turns out that the boy used the deodorant in a relatively confined space even though warning labels recommend using it in a well-ventilated area.

It should be noted that in studies performed by the British Aerosol Manufacturers' Association and the toxicology unit at St. George's Hospital in London, researchers were not able to reproduce conditions that could lead to harmful or fatal effects from excessive spraying of aerosol products in a confined space.