How does death by hanging work? 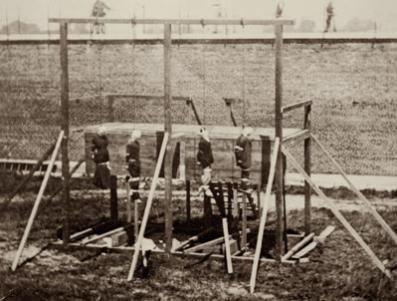 The conspirators in the plot to kill President Lincoln hang from the gallows in the yard of the Old Penitentiary at the Washington Arsenal, Washington, D.C., July 7, 1865. See more death pictures.
Alexander Gardner/George Eastman House/Getty Images

In the final days of 2006, former Iraqi ruler Saddam Hussein was hanged for the 1982 murders of 148 people in Dujail, Iraq. While capital punishment is still on the books in many countries around the world, death by hanging has in many cases been replaced by more sterile killing methods like lethal injection, which some believe to be a more humane form of execution. Many people might be surprised to learn that hanging, when carried out with modern techniques, can be one of the quickest and most painless ways to be executed.

The modern method of judicial hanging is called the long drop. This is the method that Iraqi officials used to execute Saddam Hussein. In the long drop, those planning the execution calculate the drop distance required to break the subject's neck based on his or her weight, height and build. They typically aim to get the body moving quickly enough after the trap door opens to produce between 1,000 and 1,250 foot-pounds of torque on the neck when the noose jerks tight. This distance can be anywhere from 5 to 9 feet (1.5 to 2.7 meters). With the knot of the noose placed at the left side of the subject's neck, under the jaw, the jolt to the neck at the end of the drop is enough to break or dislocate a neck bone called the axis, which in turn should sever the spinal cord. In some cases, the hangman jerks up on the rope at the precise moment when the drop is ending in order to facilitate the breakage.

­This is the ideal situation in a long drop. When the neck breaks and severs the spine, blood pressure drops down to nothing in about a second, and the subject loses consciousness. Brain death then takes several minutes to occur, and complete death can take more than 15 or 20 minutes, but the person at the end of the rope most likely can't feel or experience any of it.

How Hanging Kills the Victim

In a less-than-ideal long drop, if the distance is miscalculated or some other factor misses the mark, the subject will die of decapitation (if the drop is too long) or of strangulation (if the drop is too short or the noose knot isn't in the correct position). Strangulation can take several minutes and is a far more excruciating experience. The carotid arteries in the neck, which supply blood to the brain, are compressed, and the brain swells so much it ends up plugging the top of the spinal column; the Vagal nerve is pinched, leading to something called the Vagal reflex, which stops the heart; and the lack of oxygen getting to the lungs due to compression of the trachea eventually causes loss of consciousness due to suffocation. Death then follows in the same pattern as it does when the neck breaks, with the entire process ending in anywhere from five to 20 minutes.

When it comes to judicial hanging, the long drop is the most humane way to go. For the person being executed, the actual experience of the hanging lasts anywhere from a few seconds to a few minutes -- or at least that's the general belief by forensic scientists. In some countries where executions are carried out by hanging, though, other methods are used. In the short drop, which can be a few inches to a few feet, the subject invariably dies of strangulation and/or the compression of the arteries in the neck. The same type of death occurs in suspension hanging, in which the subject is jerked into the air instead of being dropped. And in a standard-drop hanging, the subjects falls about 5 feet. Depending on the weight and build of the subject, this drop will either break the neck and spinal cord or cause death by strangulation, carotid-artery compression or Vagal reflex. In these older methods, unconsciousness still typically occurs in anywhere from a few seconds to a few minutes, but if it turns out to be a few seconds, it's blind luck (or bad luck, depending on how the country's legal system views the practice -- if the point of the hanging is severe punishment for the subject and deterrence to other would-be criminals, a "good hang" may be the most gruesome experience possible).

Hanging is a legal method of judicial execution in 58 countries, according to Amnesty International. In 33 of those countries, it is the only method of execution. In the United States, judicial hanging is legal in both Washington state and Delaware, and three prisoners have been hanged since the death penalty was reinstituted in 1976.