What happens during the dying process? 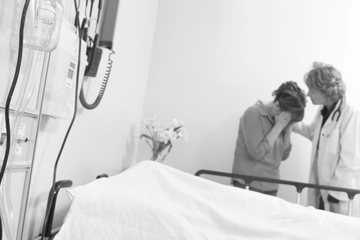 The Scout motto is "be prepared," but it's hard to be prepared for death, be it our own or a loved one's. Too much is unknown about what dying feels like or what, if anything, happens after you die to ever feel truly ready. However, we do know a bit about the process that occurs in the days and hours leading up to a natural death, and knowing what's going on may be helpful in a loved one's last moments.

During the dying process, the body's systems shut down. The dying person has less energy and begins to sleep more and more. The body is conserving the little energy it has, and as a result, needs less nourishment and sustenance. In the days (or sometimes weeks) before death, people eat and drink less. They may lose all interest in food and drink, and you shouldn't force them to eat. In fact, pushing food or drink on a dying person could cause him or her to choke -- at this point, it has become difficult to swallow and the mouth is very dry.

As the person takes in less food and drink, he or she will urinate less frequently and have fewer bowel movements. The person may also experience loss of bladder and bowel control. People who are dying may become confused, agitated or restless, which could be a result of the brain receiving less oxygen. It can be disconcerting and painful to hear a loved one so confused in his or her last days.

The skin will also show the effects of slowing circulation and less oxygen -- the extremities, and later, the entire body, may be cool to the touch and may turn blue or light gray. Some skin may exhibit signs of mottling, which is reddish-blue blotchiness. As the person gets closer to death, it will become harder and harder to breathe. Respiration will be noisy and irregular; it will sometimes seem as if the person can't breathe at all. When there's fluid in the lungs, it can cause a sound known as the death rattle. It may be possible to alleviate the gurgling and congestion by raising the person's head. If the dying person is experiencing pain, he or she will usually be given medications to manage it.

When we're watching someone die, we may have a preconceived notion of how the person should handle death emotionally and spiritually. It's important to remember that every person experiences dying differently. Some people have the need to say goodbye or to hear from another person before death, some don't. Some people prefer to partake in religious rites, while others may remain silent until the end and pass away when everyone has left the room. Doctors and other professionals who manage end-of-life care advise loved ones to take their cues from the dying and avoid projecting their own desires or needs onto the person. They also urge loved ones to continue speaking comfortingly to a dying person -- hearing may be one of the last things to go.

Effects of Diarrhea on Children and the Elderly
What are some medications for respiratory infections?
Ergo Proctor Hoc: Lessons in Ergonomics