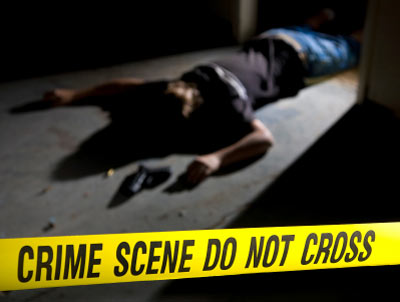 Rigor mortis is the reason why the word "stiff" is a slang term for a dead body. Two or three hours after a person or animal dies, the muscles start to stiffen. This phenomenon progresses in a downward, head-to-toe direction. In 12 to 18 hours the body is, as the saying goes, stiff as a board. At this stage, you can move the joints only by force, breaking them in the process.

It takes about two days for rigor mortis to fade, and once it does, decay sets in. If the body isn't embalmed or cooled to 38 degrees Fahrenheit (3.3 degrees Celsius) or below, it will quickly decompose.

To people who work in mortuaries, rigor is an unimportant, temporary condition. It may require them to massage the deceased's extremities to reduce stiffness and allow for easier, more effective embalming. But to police, medical examiners and lawyers in the criminal justice system, rigor mortis has much more significance. It's a clue to understanding the circumstances of someone's unexpected -- and possibly violent -- death. Rigor mortis is a piece of the forensic jigsaw puzzle, and combined with other details, it can help detectives and medical examiners figure out what happened.

But what turns flexible joints into immovable structures, and why does the process reverse itself later? Next, we'll look at why muscle tissue goes through this transformation after death.

In 1812, a French pediatrician named Pierre Nysten recorded his observation that rigor mortis follows a downward progression that begins in the upper region of the body, around the face and head, and travels in a set pattern down to the rest of body and the extremities. Known as Nysten's law, this principle likely reflects the fact that rigor mortis -- while affecting all muscles in the same way at the same time -- becomes noticeable first in small muscle groups, such as those around the eyes, mouth and jaws, and becomes pronounced somewhat later in the larger muscles of the lower limbs.

The Chemicals of Life and Rigor Mortis

Myosin, actin and ATP are central to muscle contractions.
2008 HowStuffWorks

Why does a dead body go board-stiff for two or more days? The easiest answer boils down to this: A biochemical chain reaction that causes a living person's muscles to move stops working when someone dies. When the reaction stops, the muscles become locked in place.

You have to look deep inside muscle cells to find a more detailed explanation. At the microscopic level, skeletal muscle fibers -- the ones that attach to your bones -- have two main parts:

The fibers include other proteins as well, but actin and myosin are at the heart of rigor mortis.

When you lift a weight or scratch your head, a nerve impulse sets off a biochemical reaction that causes myosin to stick to actin. These two molecules lock together, pulling the muscle's thick and thin filaments toward each other. When thousands of filaments pull together all at once, over and over, you have a muscle contraction. You can read more about all the steps of this process in How Muscles Work.

Once the actin and myosin molecules stick together, they stay that way until another molecule, adenosine triphosphate (ATP), attaches to the myosin and forces it to let go. Your body uses the oxygen you breathe to help make ATP. That oxygen supply ends, of course, with death. Without ATP, the thick and thin filaments can't slide away from each other. The result is that the muscles stay contracted -- hence rigor mortis.

During rigor mortis, another process called autolysis takes place. This is the self-digestion of the body's cells. The walls of the cells give way, and their contents flow out. Rigor mortis ends not because the muscles relax, but because autolysis takes over. The muscles break down and become soft on their way to further decomposition.

Although this helps explain why rigor mortis comes and goes, it's the outward appearance -- the relative stiffness of the body -- rather than the process that's of most interest to investigators. Next, we'll explore how the gradual progression of rigor mortis plays a part in solving crimes.

While the process of rigor mortis is taking place, two other events occur: livor mortis and algor mortis. Livor mortis refers to the maroon or purplish discoloration of the skin that happens when blood, particularly red blood cells, stops circulating and settles in the area of the body closest to the ground. If a person dies while lying on his or her back with the head turned to one side, livor mortis will show up on the back and the side of the face that is facing downward. Algor mortis is the gradual cooling of the body until it reaches the same temperature as the air around it.

Rigor Mortis at the Crime Scene

A body goes stiff in the exact position it was in when the person died. If the body's position doesn't match up with the location where someone found it -- for example, if it's flat on its back in bed with one arm sticking straight up -- that could mean someone moved it.

Although it's an imperfect marker of the time of death, rigor mortis is useful because it's like an alarm clock set to go off and stop ringing within a known time span. Several variables affect the progression of rigor mortis, and investigators must take these into account when estimating the time of death. These include:

Because rigor mortis leaves a lot of room for doubt, forensic pathologists rely on other indicators that provide greater certainty as to time of death. These include:

But without an eyewitness, investigators can only estimate the time of death -- not pinpoint it for certain. To learn more about crime scenes, forensics and related topics, see the links on the next page.

Livor Mortis at the Crime Scene

Lividity -- the telltale purple coloring that develops when the body has been in one position for a while -- doesn't lie. Once the blood has congealed, it will tell the story of a body's change in position after death.