Browse the article 10 Most Profitable Drugs 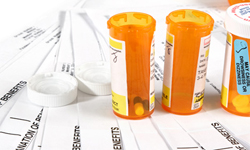 With all the lustful TV commercials, you might think it's the drugs for erectile dysfunction that make the hearts of drug company execs go pitter-patter. But it's medications that treat heart disease and high blood pressure that most excite them. The following were the top 10 best-selling prescription drugs in 2005.

A popular drug that treats heartburn, Prevacid had global sales of $4 billion in 2005 and an annual growth rate of 0.9 percent.

This is the world's most commonly prescribed atypical antipsychotic medication. At $4 billion, its sales were lower than Zyprexa's, but it had a much larger annual growth rate at 12.6 percent.

Used to treat schizophrenia and bipolar disorder, Zyprexa is Eli Lilly's top-selling drug. In 2005, it had global sales of $4.7 billion. However, unlike other drugs on the list, Zyprexa experienced a significant decrease in annual growth -- a dismal 26.8 percent.

The second biggest seller for manufacturer Pfizer, Norvasc is used to treat high blood pressure. It had global sales of $5 billion in 2005 and an annual growth rate of 2.5 percent.

This is another medication used to treat high cholesterol and prevent heart disease. In 2005, Zocor had global sales of $5.3 billion, and its annual growth wasn't shabby either, at 10.7 percent.

Although it's ranked No. 4, this asthma inhaler is in the No. 1 spot when it comes to annual growth. GlaxoSmithKline must have been breathless with its 19 percent annual growth rate. Sales for Seretide/Advair were just slightly lower than those for Nexium, coming in at $5.6 billion.

You probably know this drug as "the purple pill," and its sales numbers certainly merit the royal hue. Nexium, prescribed for heartburn and acid reflux, had sales of $5.7 billion, with an annual growth of 16.7 percent.

This medication is used to prevent heart attacks and strokes. Although it has risen to the second spot on the list, its sales were a mere $5.9 billion, less than half those of Lipitor. However, Plavix had 2.5 times the annual growth of Lipitor. 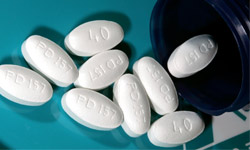 Consistently ranking No. 1, Lipitor holds the title by a wide margin. Its annual sales of $12.9 billion were more than twice those of the next drug on the list. Lipitor treats high cholesterol, which is a major risk factor for heart disease.

To learn more, see How Lipitor Works or check out the 10 Weirdest Prescription Drug Side Effects.