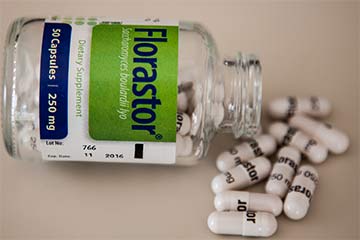 In order for a probiotic to be effective it must have 5 to 10 billion colony-forming units.
Moment Mobile/Getty Images

Raise your hand if you've ever had this experience: Your doctor prescribes a 10-day course of antibiotics for the cough you haven't been able to shake for weeks. After a few days the cough is much better ... but you suddenly have intestinal symptoms that are making your life pretty unpleasant. Long story short, the antibiotics have given you diarrhea, and at this point you'd almost rather have that annoying cough. Other than discontinuing the antibiotics (and risking the return of the cough), what can you do to banish the need to run to the bathroom?

This is the unfortunate downside of antibiotics -- they're almost too good at flushing out infections (no pun intended). As they barrel through your system, they can do a real number on your gut. They wipe out the bad stuff but can also eliminate the good bacteria that keep your digestive system healthy and in balance. And when the good bacteria are out of the picture, harmful bacteria can swoop in and take over, causing all sorts of problems. If you're lucky, your gut will just be a little bit out of whack for a while after you take antibiotics. If you're not so lucky, you could be one of the 20 percent or so who get antibiotic-associated diarrhea (AAD) [source: Hickson].

Until recently, the most common cure for AAD was to remove the cause: the antibiotics. Of course, when you stop taking them, you're not going to cure the infection that started the whole thing. So that's not the greatest solution. But now, research has been showing the advantages of taking probiotic supplements ("friendly bacteria") along with a course of antibiotics. There haven't been many studies thus far, but the results point to a drop in AAD cases in patients who are also dosed with probiotics.

There's also a lack of studies on exactly why probiotics seem to work, but there are many theories. Sending probiotics in with antibiotics keeps the gut flora balanced. When antibiotics flush out the digestive tract, this creates a vacuum of sorts that bad bacteria are all too quick to fill -- but if probiotics are in the picture, that's less room for the bad stuff. They compete for space and nourishment, basically crowding out the bad bacteria.

Some foods (yogurt, sauerkraut and tempeh, for example) are natural sources of probiotics, but they're not concentrated enough to be very effective against AAD. If you're taking antibiotics, you need a powerful probiotic supplement with at least 5 to 10 billion colony-forming units (CFUs), and they must be live strains [source: Duker]. It's likely that different probiotic strains are more effective against certain kinds of bad bacteria, but again, the jury is still out on this. Saccharomyces boulardii lyo (otherwise known as Florastor) and lactobacillus rhamnosus GG (Culturelle) are two common brands that seem to get the job done. It's important to keep taking probiotics for a few weeks after your antibiotics are finished -- your gut needs time to heal from the antibiotic upheaval, and some cases of AAD don't appear until two to three weeks later.