Browse the article How do painkillers know where you hurt? 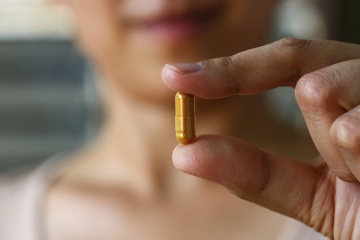 Once that painkiller moves from your hand to your mouth and to the inside your body, how does it know where to go?
superoke/iStock/Thinkstock

"Show me where it hurts."

For all of its painful associations, it's a tender phrase, one we associate with parental love and the occasional doctor's visit. As children, we couldn't use fancy words to describe our scrapes, but we could point and wince, and somehow the medicine knew where we hurt.

Or so it seemed. In reality, painkillers are less magic bullet and more shotgun blast: They cruise through the bloodstream, mixing metaphors and sabotaging the machinery of pain wherever they find it. So, if your head happens to be splitting when you pop a pill for your aching back, you get a twofer.

If you picture your body's nervous system like a series of Civil War telegraph wires, then you can imagine a series of dispatches coming into headquarters reporting damage from all over the country, which the president -- your brain -- experiences as pain. If you want to relieve the president's pain, you need to stop the sender, interfere with the wires or post a spy to intercept the messages. If you get really desperate, you can always knock the president unconscious.

Various pain meds adopt each of these approaches. Analgesics lessen pain without blocking nerve impulses, messing with sensory perception or altering consciousness. They come in many varieties, including anti-inflammatory drugs that reduce pain by shrinking inflammation. Analgesics also include COX inhibitors, which stop the signals, and opioids, which decrease the severity of pain signals in the brain and nervous system. When these just won't do, doctors turn to anesthetics, which just block all sensations, pain or otherwise, by knocking you out or numbing a particular area [sources: Encyclopaedia Britannica; Ricciotti and FitzGerald; Wood et al.].

So these treatments don't zero in on pain; rather, they wander along the transmission right-of-way, looking for pain-carrying messages and then blocking, destroying or intercepting them. To understand how this works, let's take a closer look at the physiology of pain.

Illustration of the pain pathways
© 2007 HowStuffWorks

Understanding pain has challenged philosophers, doctors and researchers for centuries. In the Far East, it began with the idea of imbalanced yin and yang forces. The ancient Greeks thought it arose from out-of-kilter bodily humors. The Muslim physician Avicenna saw it as arising from some alteration in physical condition. And, of course, numerous cultures believed that gods doled out pain as punishment and demanded it as penance [source: Encyclopaedia Britannica].

Pain research and theory began in earnest in the 19th and 20th centuries, but the medical and technological advances of the past 40 years have revolutionized the field [sources: Encyclopaedia Britannica; Craig]. A prevalent model of how pain works goes as follows.

Let's say you touch a hot stove and burn your hand. Instantly, your arm recoils and you feel pain because a network of specialized nerves called nociceptors (from the Latin noci- "harm" + receptor) has activated. Unlike other nerve types, nociceptors only trigger when they detect a harmful event, such as too much heat or pressure. When this happens, these nerves convert the noxious stimulus into an electrical signal that zips to the brain with the bad news. How? Their nerve endings change shape, creating pores that let positive ions like sodium and calcium surge in. This influx of ions drops the voltage across cell membranes and generates electrical potential. The worse the injury, the bigger the signal [sources: Wood et al.; Woolf and Ma].

That takes care of how pain nerves alert the brain and spinal cord, but how do nociceptors detect injury in the first place? In several ways, some of which we're still figuring out. Often, they detect wayward chemicals like prostaglandins. These are not "pain molecules." Rather, they are chemical substances that aid in a variety of vital bodily functions. But they should not be out bouncing around where the nociceptors can pick them up unless something has gone wrong, so they make good damage signals [sources: Ricciotti and FitzGerald; Wood et al.].

Nociceptors don't always need such chemicals to do their job; they can also detect some harmful effects directly. Excessive heat, for example, can open signal-producing ion channels on its own. So can the capsaicin in a chili pepper, which explains why, to quote Ralph Wiggum, of "The Simpsons," "it tastes like burning" [source: Wood et al.].

Personal Pain: It's Not Just for Goths

Studies show that people of different sexes, races, experiences and cultures feel pain differently. In part, this is because severe pain can alter your nervous system at a molecular level, especially if you experience it frequently and/or at a young age. Moreover, pain exists entirely in your noggin -- it's how your brain interprets a particular set of nerve signals -- and its intensity keys off emotions and mental states (indeed, psychological factors can cause pain). In short, no two people feel pain the same way [sources: Encyclopaedia Britannica; Cleveland Clinic; Craig].

Haven't Got Time for the Pain

Pain keeps us out of trouble. When it isn't busy preventing injury, it's lessening it or reminding us to let it heal. But sometimes pain becomes a nuisance, like an alarm bell that keeps clanging away long after the fire dies out.

One way to mute this din is to cut the signal off at the source. That's ibuprofen's party trick: It stops banged-up cells from ginning up or sending out more prostaglandin. Ibuprofen belongs to a whole category of pain medicines called nonsteroidal anti-inflammatory drugs, or NSAIDs. NSAIDs also relieve the swelling and inflammation that can cause pain. NSAIDs include aspirin and naproxen sodium (aka Aleve) [sources: AHFS; McNicol].

Other analgesics ignore the pain signal but muffle the bell. Acetaminophen, aka Tylenol, works in the brain and central nervous system to deaden pain, although researchers do not fully grasp how it works [sources: AHFS; McNicol].

Both NSAIDs and acetaminophen belong to a category called non-opioid analgesics. Most non-opioid analgesics work by inhibiting cyclooxygenase (COX) or COX-2 enzymes, which kick off the process of converting arachidonic fatty acid found in cell walls into the prostaglandins that activate pain nerves. No prostaglandin means no nociceptor activation and therefore no pain [sources: AHFS; McNicol; Ricciotti and FitzGerald].

For more severe short-term pain, as after an operation, or long-term pain, many doctors turn to opioids. Opioid drugs plug into an existing network of receptors located in your brain, spinal cord and body. Under normal conditions, this system works with your body's naturally produced opioids to control all kinds of processes, including pain. Natural opiates, like morphine and codeine, as well as synthetic opioids, mimic the structure of these naturally occurring neurotransmitters and hijack the system. Like spies who knock out the guards and then man the gates, they keep out other signals, including those associated with pain. They also plug into the body's reward system, producing potentially addictive euphoric effects [sources: Encyclopaedia Britannica; Fine and Portenoy; NAABT].

More intense medical procedures, like surgery, involve general, regional or local anesthesia. General anesthesia involves a mixture of drugs that calms patients, keeps them unconscious, lessens or relieves their pain, relaxes their muscles or blocks their memories from forming. Regional anesthesia locks down sensation from a whole section of the body, e.g., from the waist down, while local anesthesia numbs a small portion, like a foot or spot of skin. This might seem highly localized but, again, the painkiller doesn't know where you hurt -- the person applying it does [sources: Encyclopaedia Britannica; Mayo Clinic].

Author's Note: How do painkillers know where you hurt?

It's strange that we dismiss other people's emotional and physical pain by telling them "it's all in your head." All pain is in our heads, but then so is everything else. What we consider as vision and sound amount to no more than mental interpretations of nerve signals transmitted by specialized tissues reacting to particular wavelengths of radiation. Of course, that's assuming that those signals are real and not imagined. Indeed, in the Cartesian sense, the only experience we can be confident of is that we think. For all we know, we are just brains in jars, or assemblages of thought free-floating in space.