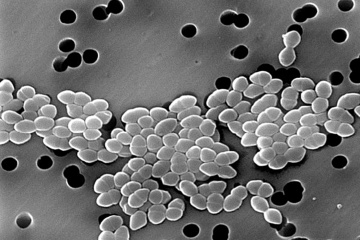 Vancomycin-resistant Enterococci, a bacteria that's adapted over time to the point that antibiotics are not as effective in fighting it.
© CDC/PHIL/Corbis

Antibiotics were once heralded as a miracle, and while they really are still a stroke of therapeutic good fortune, taking them does come with some risk.

Some antibiotics are associated with some nasty side effects; while they're designed to kill the infection-causing bacteria in your body, they can also cause problems when they kill the good bacteria living inside you. Antibiotics may cause vaginal infections (what we commonly call yeast infections), as well as upset stomach and diarrhea, among other problems.

When we overuse antibiotics we can run into trouble, too. For example, of the 68 percent of people with acute respiratory tract infections (such as sinus infections) who are prescribed antibiotics by their doctor, only 20 percent of them actually need those prescriptions [source: CDC]. Taking antibiotics when you don't need them not only can cause side effects, but may also contribute to a bigger problem: antibiotic-resistant bacteria.

When you don't use antibiotics as prescribed -- not taking the complete run of your medication or taking antibiotics when you don't need them -- you contribute to the problem of antibiotic-resistant bacteria. What this means is that the antibiotic designed to kill a specific type of bacteria is less effective against that organism because that organism has adapted -- it's evolved with exposure and time -- to be stronger against the treatment. Methicillin-resistant Staphylococcus aureus (MRSA) is well-known example of a so-called superbug, as is vancomycin-resistant Enterococci (VRE). Some strains of gonorrhea have developed resistance to multiple drugs, and some types of tuberculosis have also developed resistance to multiple drug therapies (isoniazid and rifampicin).

Hot job of 1939? Penicillin girls, employed to extract mold juice for antibiotic production. Where do I sign up?