10 Most Dangerous Items in the Office 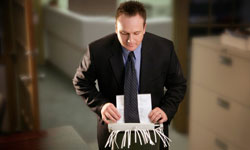 We hope this guy has a pair of scissors handy.
Design Pics/Thinkstock

Fans of NFL Super Bowl commercials might remember the 2003 competition as the day the world was introduced to "office linebacker" Terry Tate. A series of ads sprinkled throughout the televised game featured Tate, a 250-pound, football jersey-wearing behemoth who blindsides unassuming office workers for various workplace violations. Take the last of the coffee without refilling the pot? He'll lay you out ("You kill the joe, you make some mo'!"). Make a long-distance personal call on the office phone? Terry will put you through a cubicle wall.

For office dwellers whose workspace isn't patrolled by a vicious tackling machine, there are likely still a number of less menacing dangers lurking in your office space. Office workers sustain more than 75,000 on-the-job injuries -- from sprains and strains to broken bones -- each year, according to the U.S. Department of Labor's Occupational Safety and Health Administration (OSHA). Many of these injuries are caused by falls, falling objects or over-exertion, but the culprit is frequently an ordinary office item.

Before you shove that stack of papers in the shredder, read on to find out the 10 most dangerous items in the office, as well as tips for safely handling them.