by Bambi Turner
Death is a fact of life. Since the beginning of time humanity has come up with numerous ways of dealing with the dearly departed. Benoitb/Getty Images

Superstitions help people make sense out of a world that's just plain messy at the best of times, or completely chaotic at its worst. Given the mystery surrounding death, it's no surprise that people have come up with countless superstitions related to death and dying. Whether you believe them or not, it's hard to argue with the fact that they bring order to one of the most mysterious topics out there, contributing to a sense of peace and control that many people desperately crave. Read on to learn about some of the most popular superstitions related to death, dying and the great unknown.

Ever wondered why when someone dies in the movies, one of the first things those remaining alive do is slide the deceased's eyelids shut? It's based on superstitions related to the eyes of the dead. Some legends claim that making eye contact with a corpse spells danger for you and your family [source: History]. Others are more specific, suggesting that a corpse with his eyes open is looking to take someone along to the afterlife [source: Webster]. To ensure the eyes stay shut, it's tradition to place coins over the eyes, weighing the lids down. These coins also come in handy in the afterlife, allowing the deceased to pay the ferryman to transport him across the River Styx.

Even if you're not the superstitious type, this one just makes sense. After all, who wants to gaze into the eyes of the dead?

Ancient people believed birds had an air of godliness about them thanks to the birds' abilities to soar through the sky like the gods. It's no surprise then that many superstitions are linked to the activities of birds, and a surprising number of these tales involve death. For example, a person who hears the first cuckoo of the year while lying in bed is doomed to die [source: Murrell]. If she survives, a family member will take her place in the afterlife. A bird entering the house or even appearing at the window also brings death, especially if the bird is black or someone in the home is suffering from an illness. Finally, some super scary birds can bring doom simply by circling the home. Ravens, crows or owls are all seen as bearers of bad news, and even Julius Caesar was said to have heard an owl hooting on the day before he met his maker [source: Webster].

When you're driving or walking past a graveyard, do you hold your breath the entire time, just in case? Superstition has it that the souls of the dead are in no hurry to pass on once their mortal remains are safely buried below the ground. Instead, these spirits hang around the cemetery, just waiting for a chance to rejoin the living. Something as simple as taking a breath in close proximity to a graveyard could draw a restless spirit into your body, forcing you to share your space or even dooming you to death.

Expectant moms are supposed to take this even further, not only holding their breath past cemeteries, but also whistling as a hearse passes [source: Franklin]. The whistling forces breathe out, preventing a lost spirit from taking up residence in her womb.

Attending a funeral is hard enough without wondering how the deceased will fare in the afterlife. To bring comfort and ease the grief during these difficult times, people have looked to the skies for confirmation that a beloved friend or family member has reaches the pearly gates. The rumble of thunder following a funeral has long been accepted as a sign that the deceased was accepted into heaven [source: Roud]. While rain during a service or burial may make a sad day even gloomier, it too is a good omen that the deceased is heaven-bound [source: Friends of Oak Grove Cemetery].

Of course, superstitions can go both ways, and interpretation of the weather at a funeral is no exception. While thunder after the service is good news, rolling thunder during the funeral itself serves as a signal that the deceased is heading to a decidedly unpleasant place.

Superstitious folks believe that even the way a corpse is positioned for burial can impact the lives of survivors, as well as the afterlife of the deceased. It's said to be lucky for survivors if the feet of the corpse point east towards the rising sun. This makes it easier for the corpse to climb out of his grave and head east on Judgment Day – but hopefully not before [source: Webster].

The location of the grave within the graveyard matters too; The south side of the cemetery is the place to be, while the north side is reserved for less well-regarded individuals, including suicides, criminals and of course, the non-baptized. One can only imagine that leaving your loved one in the coveted southern end of the graveyard provides a boost of luck, while relegating them to the north end spells trouble for survivors. 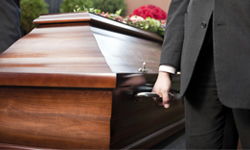 Many people place flowers on caskets in hopes that flowers will sprout in that spot in the future.
kzenon/Thinkstock

Placing flowers on the graves of loved ones is such an ingrained tradition that many don't know the reasoning behind it. A couple of hundred years ago, before modern embalming and refrigeration, flowers at funerals and on the grave helped mask the smell of decomposition. Today, this odor concealer is no longer needed, but superstitions linger regarding flowers on the grave. Some claim that placing a ring of flowers on the grave keeps the dead firmly below the ground where they belong, and prevents them from climbing out of the grave and wandering among the living [source: Webster]. Others simply feel that flowers appease evil spirits, leaving them less likely to stake a claim on the souls of loved ones.

Wild flowers on the grave have their own line of superstitions. If the deceased lived a good life, flowers will grow over his grave. A more wicked existence means a barren grave, or one blanketed with weeds [source: Roud]. Flowers or weeds, it's always bad luck for the living to pick anything growing over a grave.

Having a dinner party? If you or your guests are at all superstitious, better make sure the total dinner tally doesn't add up to exactly 13. As one popular superstition claims, when 13 sit down at a table to dine, the first to rise will be the first to die. It might sound unlikely, but this superstition is actually inspired by some pretty strong evidence. An old Norse legend tells of 12 gods who sat down to dine. When a 13th god showed up to the party, one of the gods ended up dead, and the near destruction of humanity followed. Similarly, Judas was reportedly the last guest to take his seat at the Last Supper, and everyone knows how that one turned out. Former President Teddy Roosevelt was a believer; whenever he attended a dinner party, he made his secretary hang around to see how many guests would show up. If the guest count resulted in a total of 13 at the table, Roosevelt made his secretary join in the meal to bring the number to a safe and even 14 [source: Patrick and Thompson].

In the summer of 2009, Ed McMahon, Farrah Fawcett and Michael Jackson all passed away within a three-day span. It's not the first time a trio of celebrities died in close succession, but it's one of the most famous examples of this superstition. Now, each time a celebrity dies, superstitious folks wait with baited breath to see who's next.

Of course, there's no reason to believe that one celebrity death has anything to do with the next, or to accept that the stars are destined to die in sets of three. This type of grouping is really just a way to find a pattern in tragedy – to organize a messy, unpredictable world into something that makes sense. For some, it may also be a way to hurry along an end to the bad news – just three deaths and the good times can begin once more [source: Montgomery].

In 2014, the New York Times analyzed obituaries, looking for evidence to support this superstition. In 24 years, the paper found just seven cases where three celebrities died within a five day window [source: Flippen].

For centuries, pregnant women have been discouraged from attending funerals. Folklore dictates that departed souls can linger even after death, leaving expectant mothers vulnerable to souls searching for a host that will allow them to stay part of the mortal world. Even today, moms-to-be may skip funerals due to this deep-rooted tale, though the more practical ones may claim they are simply seeking to limit stress, not attempting to avoid restless spirits.

Of course, death superstitions aimed at pregnant women don't stop at the graveyard gate. Simply entering a cemetery to pay respects to a loved one, either at a funeral or any other time, could cause miscarriage. Some young girls used this myth to their advantage in times past, heading into the graveyard in a desperate attempt to eliminate an unwanted blessing. In some cultures, entering a graveyard is fine, but treading on a grave could cause a pregnant woman to lose her child, or cause the child to be born with a clubfoot [source: Franklin].

Everyday activities enjoyed as part of a trio can spell your demise, at least according to superstition. One legend claims that when three people are photographed together, the one in the middle is destined to die first [source: Murrell]. Better find a fourth to fill in, just in case.

A similar tale cautions that a single match should never be used to light three separate cigarettes, as the third person to use the match will die. This one likely dates to the Crimean War, and is based on some pretty logical thinking [source: Webster]. In a battle zone, a lit match signals a sniper that the enemy is near. Leaving that match lit long enough to light a second cigarette gives the sniper time the aim. By the time the unlucky third man is lighting his cigarette, the sniper is ready to fire, leaving the hapless soul dead, his cigarette dangling from his lips. Using three separate matches prevents the snipers from taking aim, and helps you avoid serving as an easy target.

Despite my not-so-superstitious nature, I often find myself holding my breath as I pass a graveyard – just in case. Sometimes it's more of a game, where I end up trying to hold my breath past the cemetery only because the people I'm with are doing it too. It's just the thing to do, right?

Since so many people seem to subscribe to this superstition, I just had to take a quick peek around the web to see if I could find instances where people had tried and failed to hold their breath as they passed a graveyard. I couldn't track down any examples of this exact type of case, but I did find a story about a man who crashed his car in an Oregon tunnel after he passed out while holding his breath. Similar to the graveyard superstition, holding your breath the entire way through a tunnel is supposed to bring good luck.

In this case, the driver didn't quite make it, despite the fact that the tunnel is only 772 feet long. When he passed out, he caused a three-car accident and came to facing a mound of traffic violations and tickets.