Top 5 Common Causes of Death for People Over 300 Pounds 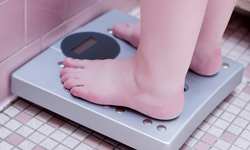 When was the last time you weighed yourself? You might not notice when a few extra pounds creep onto your waistline, but those pounds can accumulate quickly. Consuming more calories than you burn is usually to blame, but for those suffering from morbid obesity -- also known as clinically severe obesity -- it's more than just overindulging during the holidays or being too busy to get to the gym. Your risk of becoming morbidly obese is a combination of your genetics and metabolic rate. Other risk factors include habits such as eating too many calories and living a sedentary lifestyle. Morbid obesity is preventable, but you may need some intervention.

Carrying 100 pounds (45 kilograms) or more than your ideal, healthy body weight or having a body mass index (BMI) -- a measure of your body fat as determined by a ratio of your weight in kilograms to the square of your height in meters -- of 40 or greater means you're morbidly obese. Calculating your BMI won't tell you much about your health, but it's a good place to start assessing your risk of developing a chronic illness or other weight-related health problem.

The most common causes of death for people who are morbidly obese are conditions associated with weight called comorbidities, and we'll look at several such conditions starting on the next page.

Obesity combined with a sedentary lifestyle increases your risk for developing certain types of cancers, specifically breast, colorectal, endometrial, esophageal and kidney cancers. Excess weight may also play a role in your risk of developing gallbladder, ovarian and pancreatic cancers. In fact, as many as 3.2 percent of new cancer cases diagnosed in 2002 were attributed to obesity [source: Polednak].

Researchers are still trying to figure out why obesity is associated with certain cancers, and under consideration are how an obese body handles insulin, hormones and globulin, a protein found in blood.

One-third of America is Obese

An estimated 93 million Americans are obese, and of those, 9 million are morbidly obese [source: Obesity Action Coalition]. This means that more than 9 million Americans are at risk of developing chronic diseases. And people who weigh 100 pounds (45 kilograms) or more over their ideal weight are also at an increased risk of premature death.

Obesity, an unhealthy diet and too little exercise are associated with an increased risk of stroke. A stroke occurs when blood flow to the brain is decreased or interrupted, causing brain damage and brain cell death.

While age, sex and genetics play a role in your overall risk of having a stroke, obesity and obesity-related conditions increase your risk of developing high blood pressure, high cholesterol, type 2 diabetes and heart disease, including plaque buildups in artery walls, narrowing of blood vessels and abnormal heart rhythms. All of these factors are preventable and treatable precursors to stroke, and The National Stroke Organization estimates that as many as 80 percent of strokes are preventable.

The American Stroke Association reports that the risk of suffering a stroke is greater in 35- to 54-year-old obese women than in leaner women [source: Engelhardt and Ovbiagele]. Men aren't in the clear, either. A study conducted by researchers at Brigham and Women's Hospital found that 40- to 84-year-old men with a BMI of 30 or greater have twice the risk of suffering a stroke than their peers with BMIs of 23 or lower [source: Harvard Gazette].

What is Metabolic Syndrome?

The American Heart Association estimates that more than 50 million Americans are living with a condition called metabolic syndrome [source: American Heart Association]. While it's not a direct cause of death, this condition is caused by several factors converging at once in the body, including obesity (specifically abdominal obesity), high cholesterol, hypertension (high blood pressure), insulin resistance and elevated levels of inflammation.

Nonalcoholic fatty liver disease (NAFLD) is a common cause of chronic liver disease among people who don't drink alcohol, and your risk for developing the condition increases along with your weight. Obesity, a poor diet and the complications that come along with those conditions -- such as type 2 diabetes, metabolic syndrome and high total cholesterol -- increase your risk of developing liver disease.

Fatty liver disease can take many forms that vary in severity, with the most severe being nonalcoholic steatohepatitis (NASH), fibrosis and cirrhosis. NAFLD can lead to liver failure.

Researchers at the Karolinska Institute in Sweden found an increased risk of death among people with NAFLD and NASH, and a study conducted at the University of Toronto found that NASH was found in 18.5 percent of severely obese patients versus 2.7 percent of lean patients [source: Wanless].

Being morbidly obese puts stress on various systems in the body, including the hepatic system (your liver is part of this system). Under prolonged stress, the liver begins to malfunction. NAFLD has very few symptoms, and one of the earliest indicators that there's a problem is an elevated level of liver enzymes.

Twice As Likely to Die

A study of morbidly obese men weighing an average of 316 pounds (143 kilograms) found that participants who were 35 to 44 years old had a mortality rate six times higher than their lean peers, and the rate jumped to 12 times greater for men aged 25 to 34 [source: American Society for Metabolic and Bariatric Surgery]. Obesity accounts for more than 300,000 deaths a year, and severe obesity, specifically, is associated with a 50 to 60 percent increased risk of death when compared with people who have lower BMIs [source: Carmona; American Obesity Treatment Association].

The most common heart disease among Americans is hardening of the coronary arteries, a condition called atherosclerosis, but it's not the only heart-related disorder afflicting millions of Americans, even without weight factoring into the picture. Heart diseases are the leading cause of death among American adults.

Because carrying extra weight increases the stress on the body's organs and processes, including how much blood the body needs and how hard the cardiovascular system needs to work, morbid obesity increases the likelihood of developing heart disease by as much as six times compared to people who maintain a healthy weight. It also ups the risk of sudden death from heart disease-related complications, such as abnormal heart rhythms, by as much as 40 percent [source: GastricBypass.com].

According to a study published in the Journal of the American Medical Association, the obesity epidemic is close to edging out tobacco usage as the leading cause of preventable deaths among American adults. Tobacco-related deaths totaled 435,000 in 2000, followed closely by 400,000 deaths caused by poor diet and sedentary lifestyle [source: Mokdad et al].

When you carry extra weight -- even just an extra 5 to 10 percent over your ideal weight range -- you increase your chances of developing type 2 diabetes. What's the link? It's because you're overworking your pancreas.

After you eat, your body breaks food down into the nutrients it needs to function properly. Glucose is a sugar the body uses as a source of energy. When you eat, glucose enters your bloodstream and triggers your pancreas to release insulin, a hormone that helps cells store glucose as energy for later use. The body's inability to use the insulin it makes properly is called insulin resistance, and it's one of the early signs that you're on your way to becoming a diabetic. Over time, the body becomes less and less able to process enough insulin to meet the body's needs, and glucose builds up in the bloodstream. More glucose in the bloodstream triggers the pancreas to produce more insulin, until the pancreas can't keep up with the load.

Diabetes is more prevalent in people who are overweight and obese. When you gain weight, your fat cells need to store excess fat, and that puts stress on them. They begin to malfunction, and it's thought that when the cells malfunction they can't communicate effectively with the rest of the body, increasing the risk for insulin resistance.

While diabetes is a preventable and manageable disease, it can have serious complications if left untreated, and it's estimated that about 6 million Americans don't know they are diabetic [source: National Diabetes Information Clearinghouse]. Uncontrolled type 2 diabetes can lead to cardiovascular disease, kidney damage and dysfunction, periodontal disease, blindness (diabetic retinopathy), nerve damage (that can lead to loss of limbs) and death.

Acai Superfood Diet: What You Need to Know
What really happens when you can't stop eating?
How does childhood obesity work?

Is there life after death?
10 Ways to Deal With Bursitis
5 Worst Places to Be in a Thunderstorm