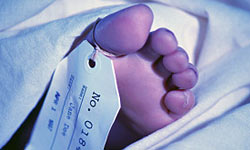 Water may be "the stuff of life," but it can also kill in crazy ways.
Stockbyte/Getty Images

Water is often called "the stuff of life" because it's found everywhere and is a part of most anything that's alive. But water can also kill and is home to killer marine life. Sharks have long held the top spot as terrifying man eaters, though that reputation is far worse than reality -- that some of the most unusual water-related deaths have nothing to do with sharks or sharp teeth. Being healthy, curious and devoted to your work can be lethal when water's involved. And vacations involving water? They can be downright deadly.

Calling water "the stuff of death" wouldn't entice people to stay hydrated and enjoy the world's aquatic marvels, however, and in reality, many types of aquatic deaths are highly unusual. On a typical day, most of us can keep our heads above water and animals at bay, but you never know when a few gallons, a whale-sized tank or even pirates -- yes pirates -- will become deadly.

Life is precious and water is precious to life, and with respect for the wonder of it all, we can also marvel at the random nature of these five unusual aquatic deaths.

Hearing about drownings isn't uncommon, particularly in summer months, but death by forced swimming is rare. In 2009, an Ohio woman in her 30s was sentenced to four years in prison for forcing her 73-year-old husband to swim continuous laps in their apartment community pool until he had a heart attack and died. Security cameras captured the number of times the man's wife blocked him from leaving the pool and prodded him to keep moving, despite allegedly having knowledge of her husband's severe heart condition. Without an audio record of the fatal swim and the verbal exchanges during the incident, however, the wife was charged with reckless homicide rather than first degree murder [source: Kropko].

Much less scandalous but unusual deaths by swimming also take place during international triathlons. Between 2006 and 2008, 14 triathletes died during their races, and 13 of those deaths took place during the swimming leg. In the 2012 New York City triathlon alone, two participants died while swimming. According to the Journal of the American Medical Association, most of these deaths result from heart conditions that the otherwise very healthy athletes never knew they had [source: Klein]. 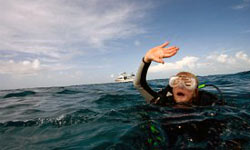 Americans Tom and Eileen Lonergan were dropped off by their drive boat operator and never picked up. They are presumed to have drowned in the ocean.
Stephen Frink/Getty Images

"Three-hour tour," plane crashes on idyllic islands and luxury yacht adventures all play out on the TV and big screen with the loss of a few heroes and heroines and usually a big rescue scene to tidy up the story line. In real life, however, very unusual deaths occur without any kind of happy ending. One true and tragic series of events in 1998 made such a splash that it inspired the film "Open Water."

Americans Tom and Eileen Lonergan were an adventurous couple, travelling the world, serving in the Peace Corps and finally, sharing a scenic dive with a charter tour in the Great Barrier Reef of Australia. Sadly, the pair was dropped off at their ocean dive site, but was never picked up. By the time the charter crew discovered their remaining gear on board and noted they had missed a head count, the couple was long gone; their bodies never found. Although some clothing and items believed to be theirs washed ashore, the Lonergans didn't make it back to shore [source: Fickling].

In 2011, two American couples started an adventure of their own with a yacht and a plan to sail around the world together. Their plans were thwarted by a band of pirates who overtook their vessel off the coast of Somalia, Africa. All four of the adventurers were killed despite attempts by the United States military to negotiate with the pirates [source: Capaccio]. Piracy on the high seas is increasing, and in a chilling statement, the pirate leader in this fatal attack was quoted as saying "I lost the money I invested and my comrades. No forgiveness for the Americans. Revenge. Our business will go on" [source: NBC]. Maybe this type of death at sea will be less unusual in the future. 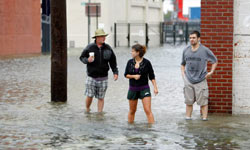 Many deaths from 2011's Hurricane Irene occurred after the storm hit when people returned to survey the damage and were carried away by unexpected torrents of water.
Jemal Countess/Getty Images

Imagine sitting in downtown traffic in a major city on your way home from work and within minutes finding your car, with you and your family inside, submerged in water. This happened in Pittsburgh, Pa., when the city's storm water system could no longer hold the amount of water coming in and four people were carried away and died in the overwhelming rush of water [source: Maher]. Surprisingly, flash floods and floods in general are more deadly each year than lightening, hurricanes, tornadoes and wind storms, and around 60 percent of people who die in flooding are in their vehicles when the water overtakes them [source: Cappella].

Many individuals survive storms and flooding and other natural disasters only to die in the aftermath. Hurricane Irene blasted much of the East Coast of the U.S. in 2011 and caused less damage than predicted in places like New York City, but some deaths occurred when people took canoes to view the aftermath only to be carried away or crushed by unexpected torrents or water levels crashing boaters against bridges. Each "calm after a storm" draws out stories of survivors of the disaster who die unusual deaths surveying the damage [source: Kleinfield].

And internationally, the 2011 flooding in the Philippines and Thailand, though a less "unusual" destructive force of water, came unexpectedly and caused the deaths of about 1,249 and 780 people, respectively [source: Associated Press]. Unusually fatal, certainly.

2: For Love of Animals 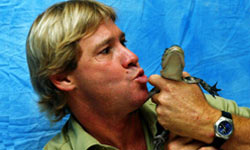 TV personality and animal lover Steve Irwin -- AKA the Crocodile Hunter -- was killed in a freak underwater accident when he was pierced in the heart by a stingray tail in 2006.
Avik Gilboa/Getty Images

Only 17 people have been killed by stingrays since 1890, and among those was the hugely popular TV personality and animal lover Steve Irwin, known as the Crocodile Hunter on the Discovery Channel and worldwide. At just 44 years old, Irwin was pierced in the chest by the lash of a stingray tail while filming an aquatic segment in 2006. The tragic death was even caught on tape [source: USA Today]. After years of wrangling alligators and risking his life in bold adventures, his untimely end came in a most unusual way while standing in shallow water.

Another young animal lover, 40-year-old Dawn Brancheau, had less fame as an animal trainer for SeaWorld in Orlando, Fla., but her untimely death in 2010 came after simply slipping and falling into the water tank of whales she trained daily. On the day of her fall, Tillikum, an orca whale, suddenly attacked Brancheau, shaking her and holding her under water long enough and with such force that she drowned [source: CNN].

Many water deaths involve large quantities surrounding or overtaking the person killed, but relatively small quantities of water can be fatal, too -- if you drink them. In 2007, Jennifer Strange, a young wife and mother of three took part in a radio station contest in California to win a new Nintendo gaming system for her family. The "Hold Your Wee for a Wii" competition had contestants drink as much water as possible without urinating, and the last person holding water would win. Sadly, as a handful of sports enthusiasts and marathon runners have found out over the years, drinking too much water is actually fatal. Water intoxication -- or overhydration -- leads to cerebral edema, a swelling in the brain that can be fatal.

During the water drinking contest, radio show listeners even called in to warn the show's hosts and producers about the risks of water intoxication, but the show and the competition went on. Strange won second place and went home only to die hours later. Her family later won a wrongful death lawsuit of $16.5 million [sources: Associated Press; Clarke and McHugh].

How can someone die from drinking too much water?
10 Worst Ways to Die
How Ebola Works