5 Worst Places to Be in a Thunderstorm 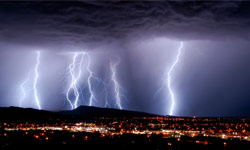 Know a friend who loves watching lightning in action? Now is not the time to call him. Electricity can travel through your land-line telephone, plumbing or any wires and shock you.
iStockphoto/Thinkstock

Lightning can, in fact, strike twice. It frequently does. If you're the Empire State Building, such contact isn't a cause for concern. The same can't be said for humans, who are equipped with all kinds of delicate tissues and organs that can be easily damaged when zapped. So when thunder roars, most of us head indoors, just like the National Weather Service recommends.

But lightning can be unpredictable. Sometimes it strikes up to 10 miles away from any rain, leaving us far from home and unprepared [source: FEMA].

That's why you need to know where to be -- and where NOT to be -- when you see those first cauliflower clouds or hear the rumble of thunder on the way.

One of the worst places to take shelter during a thunderstorm is one of Mother Nature's own creations.