Death by Invention: 5 Inventors who Died by Their Own Work

by Michael Franco
Two-time Nobel Prize winning physicist Marie Curie died of radiation poisoning after a lifetime of working with the two radioactive materials of she discovered: radium and polonium. Public Domain

In 1698, on the coast of England, Henry Winstanley lit 50 candles at the top of his invention: the Eddystone Lighthouse, the first lighthouse to ever be built on rock. Five years later, in what has become known as the "Great Storm," the lighthouse collapsed and killed him while he was making repairs to the structure.

On July 4, 1934, two-time Nobel Prize winner Marie Curie died at the age of 66. The cause? Radiation poisoning from a life working with two of her discoveries: the highly radioactive materials of radium and polonium.

And in 1945, radiation would claim the life of another inventor: physicist Harry Daghlian, who was working on a plutonium bomb core of the Manhattan Project known as the "Demon Core." While stacking tungsten carbide bricks around the core, Daghlian accidentally dropped one that caused the assembly to go critical. While he immediately withdrew the brick and kept the device from exploding, he wasn't able to save his own life; he died of radiation poisoning a month later.

Although safety measures have improved dramatically today, the art of scientific exploration and invention has traditionally been risky business. In their quest to push back the boundaries of knowledge, inventors have been known to sacrifice whole lifetimes in service to their work, but some have literally given their lives to their inventions. Here we present five of them.

In 221 B.C., China was converted from a chaotic jumble of warring states into a unified country by the ruling Qin Dynasty. In accomplishing this goal, the politicians of the time used the doctrine of Legalism -- a system of rewards and punishments meted out through the halls of government and on the streets where its citizens lived.

One of the most important figures involved in the expansion of the Qin Dynasty is Li Si, a man born to a family of commoners in circa 280 B.C. and one who rose from a simple clerk in his local government to one of the most influential men in the imperial court.

Li Si was a smooth-talking political operative who found favor with Zheng, the King of Qin and its first emperor. He coaxed the king into accepting many dubious policies of his, such as bribing enemies who could be bought and assassinating those who couldn't; tricking neighboring states into subjugation through outright lies; and collecting and burning all books except those regarding medicine, divination and agriculture. Li Si was well-liked by the king, as evidenced by his appointment to chancellor sometime between 219 and 213 B.C., which made him one of the two highest-ranking subjects in the empire.

Although the burning of books is the act Li Si is most remembered for by Chinese scholars, it's another of his ideas that has captured the popular imagination: his invention of The Five Pains. In this method of torture and execution, a criminal would have first his nose cut off, then a hand and a foot. These were followed by castration and finally death by being cut in half.

Perhaps in an example of "instant Karma," Li Si was himself subjected to the cruelties of his own invention in 208 B.C., when he was convicted of treason and executed via The Five Pains.

In the late 1700s, a Frenchman known as Joseph Montgolfier began throwing himself off the roof of his house and out of gondolas attached to hot air balloons he had invented. Of course, he didn't take these leaps unencumbered; attached to him were various parachute prototypes that helped break his fall. Around the same time, another Frenchman named Louis-Sebastian Lenormand jumped from the top of the Montpelier Observatory in Paris, also demonstrating the success of a parachute-like device. And in 1804, a third Frenchman named Bourget successfully demonstrated the use of a collapsible parachute in a jump in Germany.

Nearly 100 years later, after the parachute's design had been more refined, another Frenchman became fascinated with them. His name was Franz Reichelt and he was a tailor by trade who had a bit of inventor in him -- unfortunately.

In 1912, Reichelt climbed to the top of the Eiffel Tower to -- as he told authorities -- throw off a dummy strapped to a "flying suit." But it appears Reichelt's plan all along was to use himself in the experiment. It proved a lethal mistake for the "Flying Tailor," as the suit did absolutely nothing to break his 190-foot (57.9-meter) fall from what was at the time the world's tallest structure.

It turns out that Reichelt was a better tailor than inventor, as he seemed to take no inspiration from the various parachute designs that had come before his "flying suit." In fact, just one year before his death, an American named Grant Morton gained the distinction of being the first man to jump out of an airplane wearing a parachute that did, in fact, work.

Born on Feb. 9, 1895, in Bozen, Austria Hungary (a town that is now known as Bolzano, Italy), Max Valier never received an advanced degree in science. He did, however, have a passion for rockets, which was made all the more fervent after he read a book by German physicist and engineer, Hermann Oberth entitled "The Rocket into Interplanetary Space". Although that book dealt with rockets to other planets, Valier developed a four-stage program that began working on static engines and moved into the development of ground-based vehicles powered by rockets.

In partnership with car company Opel (who worked with Valier as a way of gaining publicity for its regular cars), Valier built the world's first rocket-powered car. He would go on to build several more rocket cars -- one of which reached a speed of 145 miles per hour (233.4 km/h) in 1928. A year later, a sled attached to a rocket of his hit an impressive 250 miles per hour (402.3 km/h).

Valier then moved into the third stage of his plan, which was to create a rocket-assisted aircraft. This stage would prove to be the last in his research however, because on May 17, 1920, while working with a liquid oxygen-gasoline fueled rocket motor, the device exploded and a piece of shrapnel severed his aorta, causing his immediate death.

Man on the Moon

Despite his death, Valier’s legacy continued, due in large part to the organization he founded known as Verein fur Raumschiffahrt, or the Society for Space Travel. Years later, a member of that society -- Arthur Rudolph -- used work he’d secretly done advancing Valier's rocket technology to help create the rocket for the Saturn V project, which put the first man on the moon.

In 1832, the world of printing was revolutionized by a press invented by Richard Hoe, who converted the process from one that used flat surfaces to transfer ink to paper to one that used cylinders to accomplish the task. As opposed to previous presses that could print approximately 400 sheets per hour, the cylinder press could churn out between 1,000 and 4,000 pages in the same amount of time.

Then, in 1865, inventor William Bullock would help the printing industry take another giant leap forward through the creation of his "Bullock Press," a rotary press that was fed by a continuous sheet of paper stored on a roll on one side of the machine. This eliminated the laborious single-sheet hand feeding process that had existed previously and once again dramatically increased printing speeds. The Bullock Press could produce approximately 12,000 sheets per hour, with printing on both sides from rolls that were up to 5 miles (8.04 kilometers) long.

Sadly, Bullock didn't have long to revel in the success of his invention. While making adjustments to a Bullock Press at the Philadelphia Public Ledger in 1867, his leg was caught and crushed in the machine. The wound turned gangrenous and the inventor -- who'd also created a grain drill, seed planter and hay press among other inventions -- died several days later.

In September 2010, James W. Heselden, who had just bought the Segway company, accidentally drove the novel, two-wheeled, stand-up person carrier off a 30-foot (9.14 meter) cliff and into a river below his estate, approximately 140 miles (225.3 kilometers) from London. 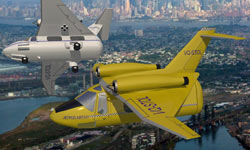 We've all seen them in movies: small rocket-like cars that ferry passengers through the air in the cities of the future. But, had it gone according to plan for an inventor named Michael Dacre, those flights of the future might already have existed today.

Dacre, born in the U.K. in 1956, joined the British army in 1975, eventually becoming a pilot who flew planes like the Gazelle, Lynx and Beaver in tours at home and abroad in Germany, the Falkland Islands and Canada. After leaving the service, he started his own flight crewing service and later formed a company known as Avcen Ltd.

It is with Avcen that he developed a craft he called the Jetpod. The Jetpod looked like a small airplane, ran quietly and was designed to need only 125 meters (410.1 feet) to take off and 300 meters (984.3 feet) to land, a concept he called VQSTOL (very quiet short take-off and landing). With such a craft, Dacre contended, runways could be built inside urban areas, making transport from airports to city centers much quicker, thereby eliminating congested highways. For example, it was predicted that the plane (which had a maximum speed of 350 mph or 563.3 km/h) could make it from Heathrow airport in the U.K. to central London in about four minutes and cost approximately 50 GBP.

Avcen had planned to build three different models of the Jetpod. The T-100 was a commuter plane, with ultra-light seats, designed to do as many as 50 trips per day from airports to center cities. The M-300 was a heavier plane that would be used in military applications to move battlefield casualties to nearby medical facilities. The E-400 was also a medical transport vehicle, but the idea was that it would be used for civilian applications and could land on a cleared road near a hospital.

Unfortunately, Dacre never got to see these planes reach production. On Aug. 16, 2009, Dacre took an eight-seater Jetpod prototype to a take-off strip north of Kuala Lumpur, Malaysia, for a test flight. After failing to get airborne three times, on the fourth attempt the craft shot vertically into the sky before falling back to Earth and killing the man who had created it -- along with his plans for a "flying taxi."