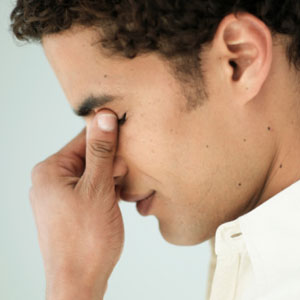 See how to ease sinusitis with tips from Dr. Robert Ivker.
Stockbyte/Thinkstock

Chances are good that if you've experienced the pain and agony of acute sinusitis more than once. Perhaps you're riding the antibiotic merry-go-round — sinus flare-up is followed by a course of antibiotics, a few weeks of feeling almost well, and then another sinus infection and on and on it goes. Or you may be a chronic sinusitis sufferer, all too familiar with daily sneezing, postnasal drip, stuffiness, and fatigue yet, blaming these symptoms on year-round allergy or colds.

If it's any consolation, you have plenty of company. Approximately 40 million Americans continually sniffle and sneeze from sinusitis, according to the most recent data from the National Center for Health Statistics. It is one of the leading chronic illness in the United States and has been since the mid-1980s.

As prevalent as sinusitis Is, however, modern medicine has relatively little to offer sufferers, and definitely no cure. Many eventually are told by a conventional otolaryngologist (ear, nose and throat doctor) that they'll "just have to live with it." That's often when they contact Dr. Robert Ivker, a Denver-based osteopath, or find his book "Sinus Survival" (Tarcher/Putnam, 2000). "I am a doctor of last resort," he acknowledges. "Most of the patients who come to me have had longstanding sinusitis and often multiple sinus surgeries."

Dr. Ivker is best known for a holistic method of treating sinusitis, allergies, and colds that he developed to soothe his own ailing mucus membranes and then used with equal success on patients in his practice. This approach became his Sinus Survival program, a comprehensive mental, spiritual, physical, and environmental course of action to heal both the cavities in the skull and a person's life.

Though he believes all the components of his program ultimately are necessary for healing sinuses, Dr. Ivker says sinus sufferers can start feeling better by doing just one thing on a regular basis, such as drinking eight glasses of water a day, irrigating the sinuses, or exercising.

Other action steps that Dr. Ivker recommends as a starting point are: using an air cleaner; following a healthy diet — avoiding sugar, dairy products, caffeine, and alcohol; and taking a high-quality multivitamin.

Each action plays a key part in restoring the health of the respiratory tract's mucus membrane, particularly the health of the cilia — "hairs" on the membrane that constantly sweep mucus and debris out of air pathways.

How to Test the Cilia for Normal Functioning

"The treatment of choice for sinus disease is to have the body return the cilia to their normal function, beating 16 times per second," says Dr. Murray Grossan, a Los Angeles-based internist and author of "The Sinus Cure," to be issued by Bantam Books early in 2001. "When the cilia are normal, people do not have sinusitis; they don't even have [sinus related] allergies."

Dr. Grossan is also the developer of a special nasal irrigation attachment for the Water Pik, a device that he says can help heal many cases of sinusitis. To prove it, he tests his patients' cilia function before and after irrigation by placing a grain of saccharin in their nose, then times how long it takes the particle to travel from the front of the nose to the back, where it's swallowed. (Do not try this at home.)

"If they taste [the saccharin] in five minutes, cilia function is probably normal," Dr. Grossan explains. "If it takes 30 minutes, then the probability is that even using all the different gadgets I have, the patient will not be cured." What that means, says Dr. Grossan, is that the patient will need to irrigate his or her sinuses on a regular basis for the rest of his life to make up for the absence of the cilia's sweeping action.

Other remedies thought to jump-start these little hairs or "brushes" are hot tea (not coffee) first thing in the morning and chicken soup — Dr. Grossan's "breakfast in bed cure." "By drinking hot tea before you get out of bed, the body gets warmed up, the cilia speed up, and you avoid sneezing and coughing."

A recently discovered threat to cilia health is the toxicity of most preservatives in saline sprays. Ironically, over-the-counter saline sprays have long been advised for sinus sufferers as a portable way to hydrate inflamed, dried-out respiratory passages and encourage cilia movement. But in 1995, researchers discovered that saline spray additives, particularly one called benzalkonium, could actually destroy the mucus lining, taking the cilia with it. Now there are several preservative-free saline sprays on the market, including Rhinocourt Aqua and Dr. Grossan's own product, Breathe-Ease.

Candida — An Overlooked Cause of Sinusitis

But say you've tried all these remedies and continue to be plagued with bouts of sinus infections. What next? A diagnosis gaining increasing respect in medical circles is that of candidiasis, an overgrowth of candida yeast in the body. Dr. William Crook, a physician in Jackson, Tenn., says he has successfully treated hundreds of patients for candida with antifungal medications, immune system support, and a sugar-free diet. He has also written several books on the subject, including "The Yeast Connection Handbook" (Professional Books, 2000).

Dr. Ivker agrees that addressing candidiasis is the missing link for many of his sinus-compromised patients and has made its treatment part of his program as well. The notion of a connection between candida and sinusitis gained a great deal of credence in 1999 after a Mayo Clinic study was published that showed subjects with sinusitis obtained significant relief from their illness via long courses of antifungal drugs.

Repeated courses of antibiotics are thought to promote yeast overgrowth by killing friendly bacteria in the body along with invading pathogens. The candida itself isn't considered harmful, but the toxins it's suspected of emitting as it runs rampant are thought to cause a host of problems, including fatigue, recurrent vaginitis, depression and chronic infections such as sinusitis.

To make matters worse, "almost without exception, every person with a yeast-related problem is bothered by food sensitivities," Dr. Crook says. Of course, most people don't know their body is bothered by particular foods, so they continue to eat them freely, putting even more strain on what is often an already overburdened immune system. It becomes a vicious cycle, similar to that of antibiotics for the treatment of sinusitis. If you think this is a problem for you, you may want to consider getting tested for food sensitivities, usually through a dietitian or a nutritionally oriented physician.

Clearly, sinusitis treatment demands constant vigilance and usually a complete overhaul in lifestyle, but the payoffs can be major. Dr. Ivker, 53, continues to practice most aspects of his program every day and says he's never felt healthier or been in better shape in his life. "It just gets better and better." He hasn't had a sinus infection in more than 12 years. "Yes, it's a long road to recovery, but I think it's worth it," he says.

Heal Sinusitis With Your Mind

Part of every illness or ailment is rooted in the mind, and sinusitis is no exception. Do you consider yourself an overachiever? A perfectionist? Do you often refrain from telling people what's really on your mind? If so, you fit the sinusitis sufferer profile painted by Robert Ivker, a Denver-based doctor of osteopathy and author of "Sinus Survival" (Tarcher/Putnam, 2000). "In my experience, repressed anger is the No. 1 contributing factor to chronic sinusitis," Ivker says. "Actually, it's the trigger for acute sinusitis — for sinus infections. The archetype is generally a high achiever, very often a first child, unforgiving, perfectionist."

The Emotional Basis of Sinusitis

"From an emotional point of view, sinusitis, bronchitis and asthma are fourth emotional or chakra issues and have to do with unexpressed or unresolved emotions," says Mona Lisa Schulz, a neuropsychiatrist in Yarmouth, Maine, and a lifelong medical intuitive.

In her book "Awakening Intuition"(Harmony, 1999), Schulz discusses how psychological issues affect the seven chakras, the fourth being related to the capacity to feel and express all emotions fully and form balanced, reciprocal relationships. (Chakras, or emotional energy centers, are more typically an Eastern way of viewing the body and its interconnectedness with the mind.)

The scientific validation for mind-body medicine has come about only in the last quarter century, so the idea that physical health can be influenced by thoughts, emotions, and beliefs is just starting to catch on in the Western part of the world. But many practitioners of psychoneuroimmunology (the medical term for mind-body medicine) relate case studies just short of amazing, particularly in the treatment of chronic illnesses like sinusitis, arthritis and back pain — prevalent conditions for which Western medicine has no cure.

Dr. Ivker believes that guided imagery, affirmations and meditation are some of the most powerful tools in his holistic Sinus Survival program. "The social and spiritual and emotional aspects have a more powerful impact on either weakening or strengthening your immune system [than strictly physical modalities]."

Breathe Your Way to Healthy Sinuses

"Stress triggers allergies [which can cause and aggravate sinusitis,] and stress predisposes us to colds," agrees John Douillard, who practices Ayurvedic and Chiropractic Sports Medicine in Boulder, Co. A former professional triathlete, Douillard is the author of "Body, Mind, and Sport" (Crown, 1995) and "The Three-Season Diet"(Random House, 2000) both of which aim to teach people to heal themselves through regular healthy practices. These days, Douillard spends much of his time helping people learn to breathe fully, because he believes that "breathing correctly can change people's lives."

Getting air into the lower lobes of the lungs is the key, Douillard explains, because "the lower lobes are calming and repair; they have nerves in them that are the exact opposite of the upper lobes, which have stress receptors."

Unfortunately, most of us breathe shallowly though our mouths. "The rib cage has a natural squeezing effect to help get air out," notes Douillard. "Add emotions to that, and for most of us our rib cage has become a cage, squeezing on our heart and our lungs, forcing us to breathe like rabbits — little, shallow, upper-chest breaths, 28,000 times a day."

To measure whether you have sufficient respiratory capacity, try this exercise from Douillard: Go for a walk, breathe deeply in through your nose, count how many steps you take for one full inhalation and exhalation. "You need at least 21 steps per breath through your nose to have some sense of respiratory efficiency." Or, if you go for a moderate run, and you should not have to open your mouth to breathe, he adds.

Are Your Feelings a Sinusitis Trigger?

Of course, in addition to the mechanics of proper breathing, the intertwining of the physical with the mental components of sinusitis cannot be overlooked. "Think of the body in terms that everyone has a loose screw somewhere," says Dr. Schulz, the medical intuitive. "Illness is in part genetic; in part due to viruses, bacteria, or old injury; and in part due to emotional health." In other words, you may be predisposed toward sinus problems as a result of a deviated septum or a broken nose, but without unhealthy emotions, thoughts, and beliefs to drive the disease process, you might never experience infected sinuses.

So consider that to fully recover from any respiratory disease, you'll need to address all facets of the cause. Otherwise, you could end up treating symptoms, which will bring some relief but never get you to the pinnacle of vitality — where Dr. Ivker, a former sinusitis sufferer, says he is today, due to tackling his problem from all directions.

Can you predict the likelihood of a child becoming a victim of heart disease?
What is acute respiratory failure?
What are some corn allergy symptoms?