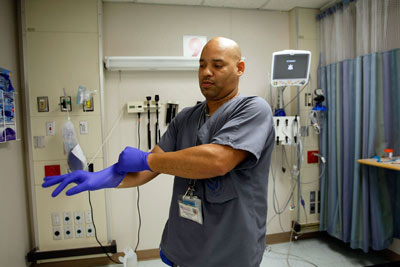 The rise of incidents of MRSA infections contracted in a health-care setting has caused some hospitals to invest in precautions like latex gloves that emit disinfectant.
Photo courtesy Joe Raedle/Getty Images

Methicillin-resistant Staphylococcus (MRSA, pronounced mer-sa) is just like any other staph bacteria. The difference is, this strain is particularly virulent -- meaning it's tough to kill and spreads easily. It can also be fatal.

Staph makes its way into the body through the skin. It can live in the skin or in the soft tissue after entering the body, but for most healthy people, it won't flourish. Our white blood cells and antibodies can usually kill the bacteria. Pre-existing flaws in the skin, such as cuts and abrasions -- which are already under attack from infectious bacteria -- can make defeating a MRSA infestation more difficult, however.

Once MRSA has found a foothold in the body, the place of infection will display what looks like small bumps, a pimple or a boil. The incubation period for MRSA varies, but usually it takes a few days before the infection takes hold. After the infection begins, these pimples or boils will begin to abscess -- meaning they will become hollow in the center and fill with infected fluid, such as pus.

This abscess can be very painful and can grow into the body, even reaching bone, deep tissue, the bloodstream and organs. Once the infection reaches internal organs or the bloodstream, the situation is life-threatening. A patient with a MRSA infection of this magnitude can suffer toxic shock (which affects the functioning of some organs), endocarditis (an inflammation of the heart's lining) pneumonia and even blood poisoning.

There are a number of signs and symptoms of MRSA infection that occur within the period from infection to severe illness, however. In other words, a MRSA infection doesn't go from zero to death in a short time. A person with a MRSA infection will notice the worsening skin irritations, as well as possibly a warm sensation around the infected area. He or she may also experience a fever.

Once the organs become infected, much more serious symptoms will appear. Chest pain, chills, joint pain and shortness of breath will all tell the sufferer that there's something terribly wrong.

One of the problems with MRSA is that it's easily spread. In fact, MRSA may be hitching a ride in your body right now without you knowing it. This is because some healthy people can serve as home to the bug without showing symptoms. An estimated 423,000 people annually are in a state of MRSA colonization without infection [source: Mayo Clinic]. MRSA can ride along in the soft tissue in the nose or on the skin.

The hospital is one of the main sites where a person can become infected with MRSA. Infections from hospital stays are so prevalent, in fact, that it's been identified as one of two sources for infection. Hospital- (or health-care-) associated MRSA (HA-MRSA) describes a type of MRSA that has evolved within the health-care setting. When it's determined that a patient in the hospital has a MRSA infection (or is colonized by the bacteria), he'll be quarantined and given a battery of antibiotics.

But if hospitals are the setting for so many MRSA infections, should a person who suspects infection stay away? Certainly not. The hospital is still the place to go for MRSA treatment. Read the next page to find out how MRSA can be treated.