How did swine flu get its name? 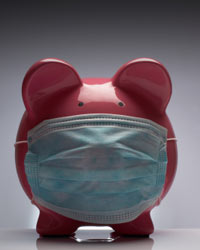 It's a corporate marketing department's worst fear: A negative event that has little or no connection to a product becomes inextricably tied to it. So imagine how the pork industry felt when a new virus was discovered in the spring of 2009 in a small Mexican village and shortly thereafter became known as "swine flu."

The thing is, swine flu already existed, and pig farmers regularly immunize their pigs against it. Much like flu viruses pass between humans, swine flu passes between pigs. This new type of virus has shown no signs of passing from pigs to humans, but once it was christened "swine flu," that moniker stuck.

Coupled with a lack of information about this new form of swine flu was its well-documented spread among humans. As the world saw more and more newspaper headlines about this contagious illness, the price of pork dropped, as did the price of various feeds used by pig farmers, due to the sharp drop in demand for their product. Some countries banned the importing of pork from nations where swine flu appeared. Egyptian authorities took it one big step further, ordering the slaughter of hundreds of thousands of pigs. All this, without any pigs actually having this form of swine flu.

It's not at all unheard of for viruses to pass from animals to humans. In particular, you may remember warning about avian flu from a few years ago. Unlike swine flu, avian flu is known to pass from birds to humans.

But what do birds have to do with swine flu? And if pigs aren't giving it to us, where did the name come from in the first place? Keep reading to find out.

Novel H1N1: It's About the Genes You Wear

When the virus first became a public health concern in 2008, early laboratory testing yielded a surprising discovery: The virus contained some of the same genes that exist in a flu virus spread between pigs. In the frantic first days of the outbreak, the discovery of the gene overlap quickly earned the virus the name "swine flu," a piece of very bad luck for the pork industry (as well as about half a million Egyptian pigs).

Further testing found that in addition to the genes it shares with the pre-existing swine flu, this new flu strain also shares genes that are found in avian flu viruses as well as human viruses. But "swine-bird-human flu" is a mouthful, and the name "swine flu" had already been hammered into public consciousness.

In an effort to protect the pork industry from further damage, the USDA officially christened the new flu virus "novel H1N1" and made a public relations effort to promote the use of this new title when discussing or describing the flu virus. This name was derived from the identification of two protein subtypes found within the virus (The "H" -- hemagglutinin -- has 16 subtypes, and the "N" -- neuraminidase -- has nine subtypes.)

Israeli authorities changed the name for an entirely different reason. In Israel, swine flu is known as "Mexico flu," because swine isn't kosher (acceptable to eat under Jewish religious customs), apparently even for use in disease names.

If pigs had a say in the matter, they would undoubtedly request a name change, though for a reason other than the obvious. Although there are presently no known cases of pigs transmitting the new virus to humans, it may be possible for humans to transmit it to pigs.

No matter what it's called, pigs' reputations -- and pork producers' livelihoods -- are still recovering.

Want more on swine flu? See the links on the next page to more articles.

Effects of Diarrhea on Children and the Elderly
What are some medications for respiratory infections?
Ergo Proctor Hoc: Lessons in Ergonomics