Is your foot really the same length as your arm from wrist to elbow? 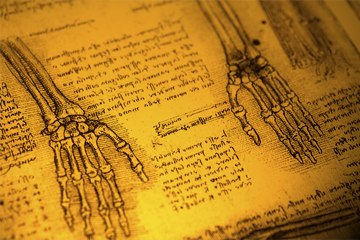 Leonardo da Vinci's sketches were accompanied by precise measurements and observations about ratios found in the human form.
Janka Dharmasena/ThinkStock

Leonardo da Vinci was an insatiable intellectual who filled scores of notebooks with meticulous illustrations throughout the late 1400s. A true, literal Renaissance man, da Vinci captured the human form on paper in a famous drawing known as "Vitruvian Man," named because the concept of human proportions was first suggested by Vitruvius, a Roman architect.

The Vitruvian Man, a perfectly proportioned person, represented the role of humans in the universe. To da Vinci, we were the only beings capable of bridging earthly and heavenly realms, a majestic, yet grounded purpose, that united us all. A closer look at da Vinci's notes accompanying the Vitruvian Man, however, revealed something more [source: Crothers].

Da Vinci easily could've earned the nickname "measuring man." His illustrations, which were so complex and detailed, also were accompanied by precise measurements and observations about ratios found in the human form. For example, da Vinci wrote that the "smallest width of the hand is equal to the smallest width of the foot between its joint into the leg and the insertion of the toes." Just hold your palm across the arch of your foot and you'll see what he meant.

When it comes to the question of whether your foot is really the same length as your arm from wrist to elbow, Da Vinci knew the answer to that, too. In fact, he recorded it in one of his notebooks: "The whole length of the foot will lie between the elbow and the wrist."

If this information isn't enough to arm your next party trick, there's even more fun afoot (puns intended). The length "between the elbow and the inner angle of the breast when the arm is folded" equals the length of the foot, too, according to da Vinci. And "The length of a man's outspread arms is equal to his height" [source: da Vinci]. Da Vinci's notes are full of these kinds of observations, although we must realize that the Vitruvian Man was an idealized person, and we mere mortals may not be so perfectly proportioned.

Want to really get the conversation going? Mention that, upon closer inspection, da Vinci's Vitruvian Man may have been drawn with a hernia — one that either killed the muse or contributed to his eventual death. It's not clear whether da Vinci's model was alive at the time he was drawn by da Vinci, who was known for using corpses as models. If the man was alive, his hernia may have been a factor in his demise.

Either way, we have this well-proportioned model — and da Vinci, of course — to thank for contributing one of the earliest surviving records illustrating this interesting fact about the human body. Yes, the feet of most humans are actually the same length as one of their arms from wrist to elbow.

What exactly is dyslexia?
The Human Body Has Just Upped Its Official Organ Count
What is the future of robotic surgery?

Why do loud noises cause your ears to ring?
Farts Can Be Silent, But Can They Be Deadly, Too?
How Your Heart Works