by Michelle Konstantinovsky Jan 22, 2020
Emma, seen here "shaking hands" with a co-worker, is the physical embodiment of what years behind a desk could do to your body. Fellowes Research

Emma's been through a lot. It's pretty clear from one cursory glance that the stooped, sallow-skinned (but still smiling!) office worker has endured a rough couple of decades sitting behind her desk.

And that's exactly what the researchers at the U.K.'s Fellowes Brands wanted to convey when they built the eerily off-putting character. That's because Emma is meant to represent the toll 20 years of poor posture and inadequately set up workstations can take on office employees.

"The 'Work Colleague of the Future' campaign was developed to shine a light on how the human body could change, physically and visually, if we continue to work with poor posture and minimal movement at our workstations over the next 20 years," Julia Dettler-Bates, European marketing communications manager for Fellowes Brands, says via email. "Our goal was to spark a debate about working behaviors, environments and lifestyles plus potential solutions." Fellowes is global manufacturer of products designed to improve life at work.

It's safe to say the team achieved its goal, creating a hard-to-ignore embodiment of its findings in the form of Emma. "Office equipment and office behaviors need to change urgently, as our research with behavioral futurist, William Higham and a panel of occupational health experts has shown how our bodies are impacted by these lifestyles and behaviors," Dettler-Bates says.

So what is the most concerning thing the research suggests? That we're sitting still at our desks far too much, and as we spend those hours on end — without moving — and our bodies are starting to atrophy in response, Dettler-Bates says.

"It's accelerating not just musculoskeletal disorders, but also conditions such as heart disease and diabetes," Dettler-Bates says. The response was to visualize these physical effects of our modern working behaviors through 'Emma.'

According to the team's research, office employees spend an average of six hours a day seated at their desks. Nine out of 10 British office workers are suffering health consequences because of their work environment, and as a result, find their job more difficult. And even when employees ask for help in preserving their health, they may not get the resources they need. Researchers found that 25 percent of employees have asked for their workstations to be improved and are still waiting for a resolution.

"We think that all of Emma's ailments are important to highlight," Dettler-Bates says. Those ailments, mostly evident from a cursory glance at Emma, include:

After years of sedentary work at a desk, Emma now has (clockwise from top left) eczema, swollen wrists, even dry eyes and a hairy nose, and varicose veins. Poor Emma!
Fellowes Research

The Best Position Is Your Next Position

Higham himself says he was taken aback by some of the discoveries. "The most surprising finding for me was the massive impact that just sitting down for long periods can have," the consumer futurist, speaker, author and CEO of The Next Big Thing says.

"I grew up thinking the most dangerous workplaces were factories and building sites but – especially now those have seen so much legislation — I'm starting to wonder if it might be offices! Like most people, I knew that sitting in the wrong position could curve the spine. But the impact that any kind of sustained sitting has is much greater than I'd expected.

"Yes it can have a long-term effect on the spine but it can also weaken leg muscles, and the heart, and even accelerate diseases like diabetes and cancer. Simply moving one's position every half-hour or so can do wonders. As one expert put it when I asked them what is the best position to sit in: 'The best position is your next position.'"

Is Gender Relevant to the Findings?

While the majority of Emma's ailments could ostensibly be seen in any overworked employee, regardless of gender, her sex does beg the question of why researchers opted to make her female. "The report is based on research on office workers across the U.K., Germany and France," Dettler-Bates says. "It is not specific to any gender. As such, the report does not cite that women are more at risk than men in developing these health issues."

Dettler-Bates says that Emma was an organic creation of the Fellowes Brands team to clearly represent the findings of Higham's research, but gender appears to be irrelevant when it comes to the plight of office workers. She says they simply chose to make Emma a female office worker so people could see her physical changes easily. Having Emma in a dress makes for these parts of the body more clearly visible. "The same ailments could be seen if we would have chosen to build a male model," Dettler-Bates says

"Creating a model to illustrate the dangers was a great idea," Higham says. "You can read any number of reports but seeing a representation of what we all could look like has much more impact. When we go around to show people Emma, I always say: 'It's too late for Emma, but you've got a chance to stop it happening to you!'"

"However," Dettler-Bates adds elaborating on which findings were most shocking, "when we first looked at the results of our future report we were definitely surprised by the sallow skin as well as the hairy ears and nose."

You can avoid destroying your body and becoming an 'Emma' by simply moving more during your workday.
Matt Alexander/Fellowes Research

How to Not Become Emma

At the end of the day, the team behind Emma just hopes her creation wasn't in vain. "We hope that Emma teaches office workers and the public about the serious negative impact that modern working behaviours can have on our bodies," Dettler-Bates says. "We hope that people better consider their well-being at work."

Dettler-Bates says that Fellowes Brands has come up with specific takeaways for individuals and businesses alike, in hopes of encouraging more healthful work habits at every level to avoid long-term health damage as a result of the office environment:

When it comes to the actions businesses can take to prevent workers from suffering Emma-like fates, Dettler-Bates says organizations need to prioritize employee health in concrete, personalized ways. "Companies need to ensure that they are complying with legal requirements and conducting workstation risk assessments for their employees," she says. "This will identify individual needs to ensure employees are working comfortably and with the correct posture. Ergonomic solutions such as monitor risers and wrist supports can help to position screens and input devices to reduce strain and discomfort."

Dettler-Bates also adds that more movement is a must in the workplace and that companies ought to investigate the implementation of healthy workspace solutions like height adjustable desks and sit-stand desk converters. "More radically, they could look at ways to combine office work and physical work," she says. "Some progressive organizations are already encouraging their workers to stay physically fluid throughout the day. A few are discouraging sedentariness by offering myriad working locations and sit-stand spaces to use throughout the office and promoting 'walking meetings.'"

And while we all know more movement would probably serve us well in our mostly-sedentary lives, Dettler-Bates points out that some less obvious factors took a toll on Emma throughout her 20 years on the job, and individuals and companies should be aware of their effects.

"Air quality, artificial lighting, germ-laden surfaces and poor-quality building materials can all make us ill," she says. "Organizations should act against poor office air conditioning and the increasing use of vapour producing artificial materials to avoid Sick Building Syndrome (SBS)." Researchers define SBS as "a situation in which the occupants of a building experience acute health- or comfort-related effects that seem to be linked directly to the time spent in the building."

To combat at least some of these negative outcomes, Dettler-Bates says it's essential for workers to take in some benefits from the great outdoors, even if they're stuck indoors all day. "Natural light stimulates metabolism, controls hormonal balance and the immune system, and promotes cell replenishment; artificial light removes these benefits," she says. "It can also negatively impact workers' internal clocks, making them sleepy in the day and restless at night. That's why it is so important offices have as much natural light as possible."

"I hope Emma gives a wake-up call to other office workers, like she did to me," Higham says. "With so many of us spending so long working at desks these days, we really need to reassess our office behavior and exercise a little more self-care. But I hope it also makes employers think about what they expect from their employees. Not only is common courtesy to care about your team, it's also good business sense. A healthy worker is a much more productive one!"

Now That's Interesting
According to Fellowes' research, Emma's issues are rooted in very real statistics they uncovered when surveying current office workers: 50 percent reported strained eyes, 49 percent cited sore backs, and 48 percent complained of headaches as a direct result of their workspaces. Seven out of 10 also relied on medication to manage their health problems.

Does Mushroom Coffee Have Medicinal Properties? 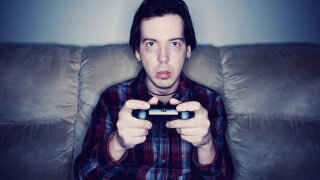 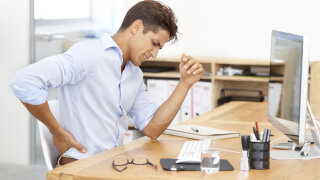 Why is sitting in a chair for long periods bad for your back? 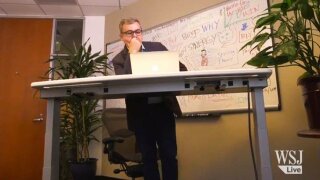 This Bossy Desk Decides When You Stand Up and Sit Down