Scientists Discover Something Mind-blowing About How Usain Bolt Runs

by Patrick J. Kiger Aug 2, 2017
On Aug. 20, 2008, Jamaican sprinter Usain Bolt broke the world record and won the gold medal for the men's 200-meter, with a time of 19.3 seconds at the Olympic Games in Beijing, China. Exactly one year later, Bolt broke his own record in Berlin with a time of 19.19 seconds the World Athletics Championships in Berlin, Germany. Julian Finney/Getty Images

Jamaican sprinter Usain Bolt is the world record-holder in both the 100- and 200-meter, and winner of those events in the last three Summer Olympics. Bolt can hit a top speed of around 27 mph (43.5 kph), and has clearly established himself as the greatest sprinter of all time. But there's something curious about his legs, and the way he uses them.

As the athlete prepares to run in his final world championship meet in London's 2017 World Athletics Championships, taking place Aug. 4-13 and less than three weeks before Bolt's 31st birthday, scientists are still trying to figure out just how the fastest human on the planet manages to achieve such incredible speed. Researchers at the Southern Methodist University (SMU) Locomotor Performance Laboratory don't quite have the answer yet — but they've made a surprising discovery.

The researchers analyzed video footage of Bolt and other sprinters from the 2011 Diamond League race at the World Athletics Championships in Monaco. They also used a "two mass model" analysis tool they developed, which allows them to study the physical forces that a runner creates — without actually bringing Bolt into a lab and putting him on a treadmill. They found that Bolt had an uneven, assymetrical stride, which is something that scientists might have expected to slow him down.

When he runs, Bolt's right leg strikes the ground with 13 percent more peak force than does his left leg, and with each stride, his left leg stays in contact with the track about 14 percent longer than the right. The researchers findings have been published in a new study in the Journal of Experimental Biology.

Here's an SMU video explaining even more of the science behind validating the two-mass model the researchers used:

Bolt's asymmetrical stride is probably due to his anatomy. As he recounted in his autobiography "The Fastest Man Alive: The True Story of Usain Bolt," Bolt discovered as an adult that he has scoliosis, a condition in which his spine curves slightly to the left, which has forced his hips out of alignment so that his right leg is a half-inch (1.2 centimeters) shorter than the left. Bolt has written that he feels awkward standing still, and leans to the right because it feels uncomfortable to stand and place pressure on his left leg. Sitting in the same position for too long gives him backaches.

SMU biomechanics researcher Andrew Udofa, who led the research and presented the findings in June at the 35th International Conference on Biomechanics in Sport in Cologne, Germany, says that Bolt's asymmetrical stride seems to be the result of adapting to those structural problems.

"The manner in which he runs with his leg length asymmetry appears to be the most ideal and efficient pattern for him to successfully run at high speeds," says Udofa, via email.

As he prepares to retire from competition, Jamaica's Usain Bolt strikes his signature pose during an Aug. 1, 2017, press conference ahead of the World Athletics Championships in London.
Michael Steele/Getty Images

As for precisely what makes Bolt so much faster than other sprinters, though, Udofa cites other factors.

"A major advantage that Bolt has over his competitors is not his leg-length differential, but really the absolute length of his legs," says Udofa. "With each step, an individual's contact length — [the] horizontal distance traveled while the foot is in contact with the ground — is essentially equal to their leg length. Leg length is typically 53 percent of body height. Standing at 6 feet 5 inches (1.95 meters), Bolt towers over many other sprinters, and as a result has a much longer leg length. "

"Therefore, with each step on the track he covers a greater horizontal distance than other sprinters," says Udofa. "This contributes to him taking three to five less steps over the course of a race when compared to other individuals that he's competing against."

As a 2013 GQ article on Bolt noted, that advantage in leg length enables him to cover 100 meters in just 40 strides, while most runners need about 45 to cover the same distance.

"Our previous published research has shown greater ground forces delivered in shorter periods of foot-ground contact are necessary to achieve faster speeds," says Peter Weyand, head of the Locomotor Performance Lab, in an SMU press release on the research. "This is true in part because aerial times do not differ between fast and slow runners at their top speeds. Consequently, the combination of greater ground forces and shorter contact times is characteristic of the world's fastest sprinters."

Bolt's sprinting supremacy undoubtedly also has to do with his diligence at training. In addition to his running workouts, Bolt regularly engages in 90-minute strength training workouts in the gym, including a lot of hamstring curls and leg extensions to build his quadriceps muscles. To keep his back healthy, Bolt also spends a lot of time on core strength, performing exercises such as leg raises, side sweeps, reverse crunches and side plank clams.

Whether Bolt could run even faster if he didn't have scoliosis, and had legs of equal length, is something the scientists haven't discerned. As Weyand recently told the New York Times, "That's the million-dollar question."

Usain Bolt will run the final races of his career during the World Athletics Championships in London, competing in the men's 100-meter on Saturday, Aug. 5, and seven days later in the men's 4x100-meter relay race.
Cameron Spencer/Getty Images
Now That's Interesting
During a 2015 world championship meet, a cameraman on a Segway accidentally knocked over Usain Bolt while the runner was celebrating his win in the 200-meter. 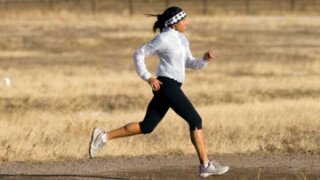 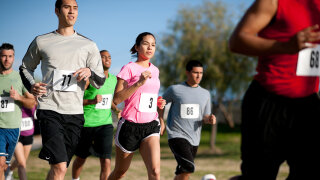 From the 5K to the Marathon, American Runners Are Slowing Down 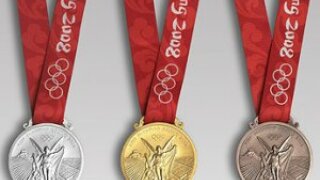 What are Olympic medals made of?