by Tom Scheve
Prev NEXT
10

Satisfy Your Morbid Sense of Curiosity 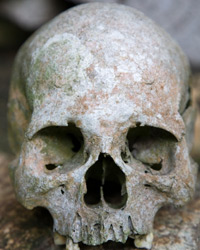 If you like horror movies or have a fascination with the macabre, why not explore your interests through your job?
©iStockphoto.com/ErikdeGraaf

If you're a person who delights in finding answers to the seemingly unexplainable, imagine the thrill you'd get when a dead body turns up and everyone looks to you for the answer. Nearly every workday represents a new riddle for a coroner, who must then use knowledge, curiosity and legal authority to solve it.

The phrase "morbid sense of curiosity" might as well be the chief qualification a person needs in order to become a coroner. After all, there's nothing more curious than an unexplained or sudden death.

While many jobs are tedious and repetitive, a coroner's duties frequently involve bringing sense to the apparently senseless, and answers to questions regarding life and death.

For the morbidly curious, there's a big allure to being the first to know about a suspicious death. While curious amateurs must await the next breaking news update to find the answers they seek, medical examiners can take satisfaction in knowing that their work is the breaking news, and the news won't break until their work is done.

Next, we'll learn what's cooler than catching a killer: nothing.