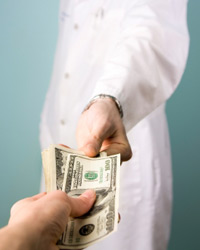 We all know that doctors are paid well, but did you know that medical examiners get a great salary and government benefits, too?
©iStockphoto.com/espeigle

There are a lot of good reasons why a person would become a coroner or medical examiner, and pay is among them.

It's a special responsibility that requires a unique person who not only has a hunger for the truth, but the skills and abilities to uncover it. Most local governments understand the value of attracting -- and keeping -- a talented coroner or medical examiner, and they provide financial compensation that serves those ends.

Plus, most people don't have to spend portions of their days around dead bodies, let alone make sense of how they died. It's safe to say coroners and medical examiners deserve every penny they get, if not more.

Salaries generally range from around $100,000 to as high as $250,000. Additionally, coroners and medical examiners receive government benefits such as health and dental insurance, matching 401k funds and retirement.

When their skills are needed in a civil trial, a medical examiner may get a hefty consulting fee in exchange for being an expert witness.

As we'll see next, another cool thing about being a coroner or medical examiner is seeing your profession represented in nearly every police drama on television.