by Meisa Salaita
A patient swallows tuberculosis medication in India, where the government offers it for free. The treatment for TB involves a months-long course of combination antibiotics that must be taken every day, otherwise fatal drug resistance can develop. © Andrew Aitchison/In Pictures/Corbis

It's a scary movie cliché – the good guy does everything he can to kill the bad guy, and no matter what he tries, the bad guy just keeps getting back up, bloody and mangled, but still alive somehow. Eventually, the hero deals one final blow, and the evildoer dies.

Health care is a lot like these scary movies. Doctors fight the villains – let's say bacteria – with all the tools they have – in our case, a slew of antibiotics. The bacteria fight to live, but eventually the antibiotics prove too powerful. The bacteria and the resulting infection die, and we live. Yay for modern medicine!

But you know how where there's a bad guy, there's always a sequel in the making where he's not really dead? In the health care world, we're moving rapidly toward that same scenario. The bugs that are infecting us are transforming into superbugs, impervious to all known antibiotics. Health care leaders across the globe are warning that many of the bacteria that harm us are growing resistant to the drugs we've been using to combat them, pushing us toward a post-antibiotic world where the bacteria just might win.

A nurse uses chlorhexidine gluconate bath wipes on an elderly patient at a Florida hospital. Some hospitals have found the wipes to be handy in protecting ICU patients from MRSA infections. © Will Vragovic/ZUMA Press/Corbis

Bacteria are developing their own fight song that goes a lot like that Chumbawamba song of the late '90s: "I get knocked down, but I get up again. You're never going to keep me down."

It's a beautiful example of evolution in action. Bacteria, like all other organisms, just want to survive, so over time they adapt to their environment. Amid all the bacteria that are causing a particular illness, minor genetic differences may exist. When exposed to antibiotics, these differences may make one particular bacterium in the crew more or less susceptible to the drugs. The more susceptible bacteria die off first, and the robust ones stick around, reproducing and creating a stronger generation of bacteria that's more resistant to the antibiotics. This happens repeatedly, leaving bacteria that have evolved to overcome any antibiotic obstacle. So while a particular antibiotic treatment may kill off certain bugs today, those bacteria are evolving and that same treatment may not work tomorrow. This scenario is a reality for a growing number of different bacterial species and is resulting in superbugs causing 23,000 deaths each year in the U.S. [source: Borel].

The most common superbug that you may have heard of is a type of staph infection, methicillin-resistant Staphylococcus aureus, or MRSA. Until new treatment options were developed, this strain of staph was incredibly difficult to treat for decades. Following quickly in its tracks in developing drug resistance? Bacteria that live in the gut like Escherichia coli and Klebsiella and the bug that causes gonorrhea. One of the scariest recent examples is drug-resistant tuberculosis where alternative treatment options don't seem to work at all. Superbugs like these increasingly are forcing us to revisit the way we approach health care.

Not a lot of new antibiotics being approved by these guys lately. © Jason Reed/Reuters/Corbis

Antibiotics offer a quick fix to many problems. They quickly get people in and out of doctors' offices, they help us to avoid surgery, they even help us during surgery to stop potential infections. But when antibiotics can no longer serve in the same capacity, how will that affect health care systems in developed countries?

The number of superbug incidences is climbing steeply. Meanwhile, the number of new antibiotics approved by the U.S. Food and Drug Administration has plunged, largely due to small profit margins for pharmaceutical companies for the investment in developing different antibiotics [sources: McArdle; Kuchment].

The focus of the U.S. health care system will have to shift drastically to accommodate this disparity, with a lot more spending earmarked for infections and a lot less for everything else. In some ways though, superbugs may actually reduce costs. People won't have elective surgeries, there would be no transplant surgeries, and to be blunt, people will die much earlier, so we won't be treating people for various ailments into their 80s and 90s.

That said, the costs of treating infections would rise dramatically. When popping a few antibiotic pills doesn't work anymore, we'll have to turn to other resources such as using intravenous antibiotics, obviously a much more expensive endeavor, especially for something as seemingly trivial as an ear infection.

In this illustration, bacteriophages (the things that look like bugs topped with scepters) are shown injecting their genome into the bacteria. Phage therapy has gotten attention as a way to potentially fight antibiotic-resistant bacteria © Carol & Mike Werner/Visuals Unlimited/Corbis

If not antibiotics, then what? Scientists have started turning toward viruses to kill off bacteria. These specialized viruses, called bacteriophages, infect bacteria. Once in control, the phages use the bacterium's own internal machinery to replicate until the bacterial cell is full and then bursts like a balloon. The bonus of this therapy is that phages evolve along with the bacteria, making the problem of bacteria developing resistance to treatment easier to overcome. Another perk is that bacteriophages are very specific. They only target the particular bad bacteria you want to kill, and leave everything else, including other good bacteria, alone.

A derivative of this phage treatment with fewer complications for the patient is using only phage enzymes and not the whole virus. Bacteriophages produce enzymes called lysins that can eat through bacterial cell walls until they break open and fall apart, killing off the infection.

The idea of using viruses to combat bacteria was around before Alexander Fleming discovered penicillin, shuttling us into the era of antibiotics. Now that it looks like that era is ending, we're putting our money back on the viruses to help us fight off harmful bacteria.

2: Bacteriosins and Particular Peptides: More Weapons in the War

A group of human antibodies (the Y-shaped proteins) gears up to defend against foreign objects like bacteria and viruses. © Science Picture Co./Corbis

When someone gets an infection, the first thought is, "we need to kill off the bacteria." It's not usually, "let's put some more bacteria in there!" However, that just may be a viable alternative to antibiotics. Certain bacteria produce antimicrobial toxins called bacteriocins, and they can use it to kill their own kind, especially when conditions are cramped and food is scarce. It's every man for himself, so to survive, these bacteria shoot the bacteriocins at the closely related species nearby that is causing the infection. Bad bacteria dead; infection gone; human happy.

Another promising alternative therapy that may take center stage in the post-antibiotic world is the use of cationic or antimicrobial peptides. Peptides are like mini-proteins, and these antimicrobial ones have the ability to both break up bacterial clusters by disrupting communication between the organisms and to kill them off [sources: Borel; Izadpanah and Gallo]. The bonus is that they may also stimulate our own immune systems to fight harder to wipe out the infection.

Boosting our immune systems may be a key component of fighting infection in the future. In addition to using cationic peptides to coax our immune systems into action, researchers are starting to toy with using human antibodies to identify invading bacterial cells at an infection site, thereby signaling the immune system to enter and destroy. Clinical studies for this therapy have shown promising results [source: Fernbro].

1: Best Practices Now and in a Post-antibiotic World

If you're prescribed antibiotics, you need to make sure you finish the full course. Don't leave a few hanging about. Maya Kovacheva Photography/iStock/Thinkstock

First off, let's stick to our basic weaponry. Getting rest, drinking fluids, exercising, making long-term investments in our health – all of this will make us less susceptible to infection. We should do this stuff now anyway, but certainly we will need to make the extra effort once we enter a world where a simple infection may not be treatable. And to otherwise keep infections at bay, we will have to take extra care in washing our hands and handling food.

Finally, some behavior changes will be necessary in how we approach antibiotics. Many bacteria have already built up a resistance to a number of antibiotics out there. To minimize our contributions to bacterial evolution of antibiotic resistance, we need to be careful about how we take antibiotics. Giving our bodies a chance to fight the infection before popping pills is a good start. If we don't expose the bacteria to the antibiotics, they can't develop resistance. And often our bodies do a fine job killing off infection without the help. Lastly, it's important to finish the entire course of antibiotics. By stopping early when we feel better, we're leaving those last bacteria that are better at battling the antibiotics to thrive, reproduce and build immunity to the drugs. We've got to nip it in the bud while we have the chance. 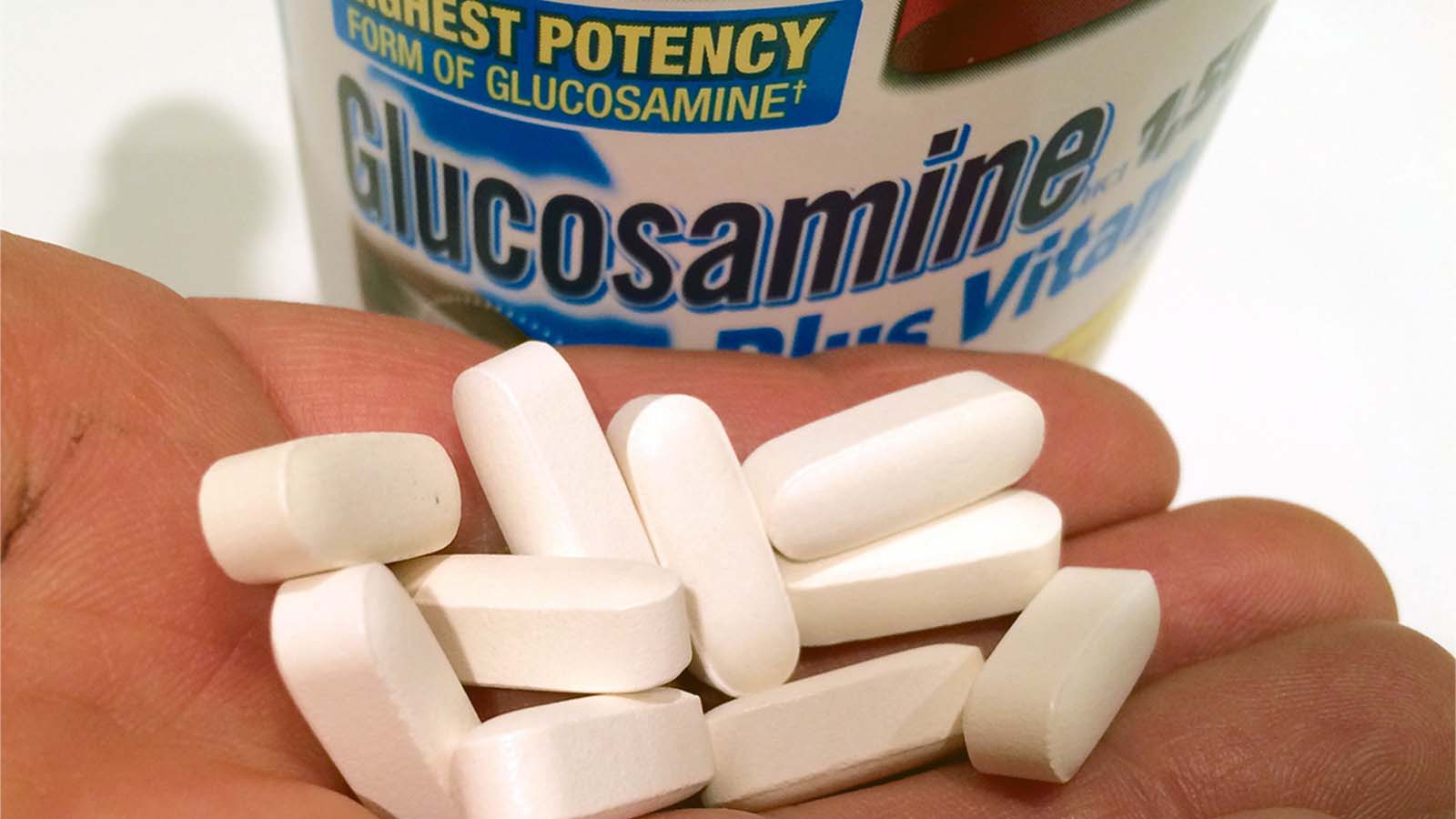 As both human and animal bodies age, the cushioning connective tissue known as cartilage begins to wear down. That's where glucosamine comes in.

I was sitting at my kitchen table working on this article when my visiting brother-in-law complained of a mild sore throat and found a bottle of unused antibiotics in our medicine cabinet. As I watched him pop a pill knowing he probably had no infection and certainly had no intention of finishing the entire course, I wanted to shout out "Noooooooo!"

It's a funny thing – we're all in this together, but when it comes down to it and we don't feel good, we want a quick fix and don't want to think about the long-term effects of the choices we make. Writing this piece made me want to step up more and do my part in keeping the bacteria from developing drug resistance. Live a healthy lifestyle to keep infection away, try to fight off illness without drugs as long as is feasible, and then when I do take antibiotics, finish the whole course.

Could Phage Therapy Fight Superbugs?
Can you breastfeed if you have MRSA?
10 Ways That Doctors Treated Infections Before Antibiotics

10 Future Jobs in Health Care
What happens if you go to the ER and don't have insurance?
Do antibiotics interact with dairy?