Do antibiotics interact with dairy? 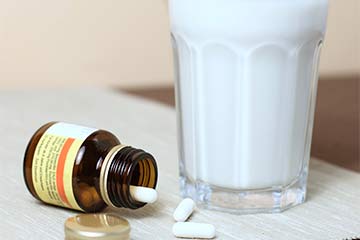 Consuming dairy products along with antibiotics doesn’t necessarily cause side effects, but it might lessen the drug's strength,
liveostockimages/iStock/Thinkstock

It's never fun to have to take a course of antibiotics. On top of being sick, you have to navigate the lists of side effects and possibly unpleasant interactions with foods, vitamins and other drugs. They're different for every medication, so even though you might have had to avoid alcohol the last time you took antibiotics, it could be just fine this time. Dairy is one item that pops up on some warning labels and not others. Why is it OK to mix dairy and antibiotics only sometimes?

Food can have a major effect on the bioavailability of some antibiotics. It can change the way the medication is absorbed, allowing less of it into the bloodstream and making it less effective. Not all antibiotics react the same way when they interact with nutrients in the digestive system. Some seem to be totally unaffected, but some combine with different elements in the nutrients, which can completely change the molecular structure of the drug. This affects its absorption ability, ensuring that at least some of the antibiotic won't make it into the bloodstream at full strength, which lowers the antibiotic's effectiveness.

Calcium is one element that seems to cause problems with many kinds of antibiotics. Again, some aren't affected at all. It's perfectly fine to chase your penicillin pills with a glass of milk, for example. But tetracyclines and fluoroquinolones -- two of the most prescribed classes of antibiotic in the United States -- are another story. They tend to bind to calcium (and other minerals, like iron, zinc and magnesium) in a way that prevents it from being fully absorbed into the blood.

Every drug in the tetracycline and fluoroquinolone families has this calcium interaction to some degree, so concomitant (simultaneous) use of them with calcium-containing products is always a no-no. You definitely don't want to pop some Levaquin and then eat a slice of pizza -- there will always be a significant effect on bioavailability. But some drugs show only a miniscule decrease in absorption if a patient has dairy a couple of hours before or after their dose of antibiotics.

As always, it's important to read the instructions that come with your antibiotics carefully and have a discussion with your doctor about specific foods to avoid. And it's not only dairy products that you might have to avoid: calcium-fortified orange juice, antacids, calcium supplements, laxatives and multivitamins could adversely affect your antibiotics, too. Sometimes it's OK to have these things a certain period of time before or after you take the antibiotics, but sometimes you'll need to stay away from them altogether until the course of antibiotics is finished.