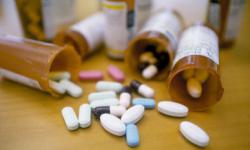 Read the directions and directly you will be directed in the right direction. See more drug pictures.
Ron Chapple/Taxi/Getty Images

Most of us take prescription drugs -- drugs that, by law, must be prescribed by a doctor -- at some point in our lives. If all goes well, the drug works for you as it's supposed to. But there's no "magic bullet," or drug that works the same for everyone without any risks or side effects. A side effect is basically an unintended occurrence that results from taking a drug. Side effects can be good or bad, depending on how you use the drug. For example, antihistamines, used to help with allergy symptoms like itchy eyes and sneezing, have the side effect of making you feel very sleepy. If you're having trouble sleeping, this side effect is great. If you need to deal with your allergies as well as drive your car or function at your job, however, it's bad.

When you pick up a prescription at a pharmacy, you get a list of common side effects. Regardless of the drug, the most common side effects are nausea and vomiting, allergic reactions, drowsiness, insomnia, heart problems (such as heart palpitations) and dependence. Often, there's something that you can do to help lessen the possibility of unwanted side effects. Some medications can make you feel nauseated if you take them on an empty stomach, for example, so it's a pretty simple fix to eat something.

There are some prescription drugs, though, that can cause side effects that are wildly different from those listed above. In some cases, the side effects were discovered during FDA trials and were deemed acceptable risks. In others, the side effects turned out to be catastrophic but weren't well-known until after the drug was widely used. Let's start off with a weird side effect that falls under the former category -- you may (or may not) remember it.