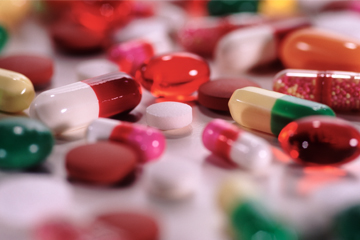 Will you get sick taking ibuprofen while on a course of antibiotics?
© Mark M. Lawrence/CORBIS

Even after you've started a course of antibiotics, you still might want to ease some lingering pain or discomfort. But with all the possible side effects and drug interactions, it's hard to know which kind of pain reliever (if any) to take. Is it safe to reach for a bottle of ibuprofen, or should you just tough it out?

Always check with your doctor before you combine any medications with antibiotics, but for the most part, it shouldn't be a problem to take ibuprofen. Most major classes of antibiotics − macrolides, penicillins, cephalosporins, nitrofurans, sulfonamides and tetracyclines − don't show any major reactions with nonsteroidal anti-inflammatory drugs (NSAIDs), the drug family that ibuprofen belongs to.

Of course, there is one major exception to the rule: fluoroquinolones, which are the major exception to many antibiotic rules. Fluoroquinolones are extremely powerful drugs, and with this power comes some pretty severe side effects. In 2008, the U.S. Food & Drug Administration (FDA) issued a boxed warning for all fluoroquinolones because of their risk of causing tendon damage and rupture. (A boxed warning is the strongest available, designed to make all doctors and patients sit up and take notice.) The FDA took action again in 2013, releasing a boxed warning about the danger of peripheral neuropathy while taking fluoroquinolones. Peripheral neuropathy happens when there's damage to the nerves that run between the spinal cord and brain, causing numbness, tingling, pain, and possibly long-term disability in the arms and legs.

In a perfect world, the whole fluoroquinolone-ibuprofen issue should be moot. Because of their risk of such side effects, most fluoroquinolones are supposed to be reserved for use as a last resort. But doctors wrote 23 million prescriptions for fluoroquinolones in 2011 – it's difficult to imagine that each of these patients was in a dire situation [source: Miller]. So if your doctor prescribes Cipro, Avelox, Levaquin, Factive, Noroxin or Floxin as a first line of defense for a urinary tract infection or pneumonia, ask lots of questions − and maybe get a second opinion.