Lipitor at Work in Your Body 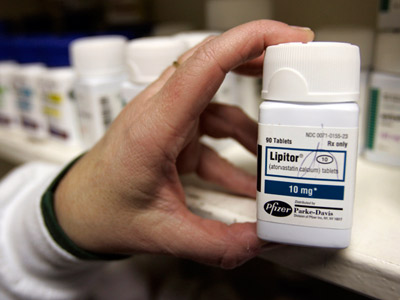 Lipitor is in a class of cholesterol-lowering drugs known as statins. Statins were created in Japan in the early 1970s, after research showed that an enzyme called hydroxyl-methylglutaryl-coenzyme A (HMG-CoA), located in the liver, produced as much as 80 percent of the cholesterol count in the body. While people can directly affect 20 percent of their cholesterol count by watching their diet, there was nothing on the market that directly went after that cholesterol-creating machine.

The first statin, mevastatin, was developed in Japan in 1971, and several others followed over the years. Lipitor is the marketing name for atorvastatin. Statins work by inhibiting HMG-CoA. Not only does that reduce the amount of cholesterol that's produced, it means that the liver pulls some of that extra cholesterol out of the blood stream. In this way, your overall cholesterol count is lowered.

What differentiates Lipitor from other statins is that it reduces more cholesterol at lower doses compared to the competition. The typical starting dose for Lipitor is 10 milligrams daily, and it can be prescribed at levels of up to 80 milligrams daily, whereas other statins are typically prescribed in amounts of 20 to 40 milligrams daily. When doctors first began prescribing statins, many were worried about long-term effects of high doses of statins, so some of Lipitor's early success is somewhat psychological: Doctors were able to rationalize that if 80 milligrams was safe, then 10 milligrams must be extremely safe [source: Simons]. Scientists who developed the compound attribute the potency of the low dose to a longer half-life of the drug, which means it works in the body longer [source: Winslow].

Currently, there is no generic version of Lipitor. If you want the patented formula that has been shown to reduce bad cholesterol by as much as 60 percent, then you have to pay more [source: Lipitor]. Much of Pfizer's current marketing campaign is meant to show you that no other statin will work in your system the way that Lipitor will, and that it's not worth switching to a cheaper generic prescription. As of now, studies show that atorvastatin is more potent than its generic rivals and may have additional benefits, such as a lowered risk of heart disease [source: Berenson].

Just who should be taking Lipitor? Find out on the next page.