Who is a Good Candidate for Total Knee Replacement? 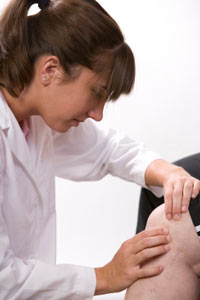 Total knee replacement should be a last resort -- go through all your other options first.
©iStockphoto.com/aceshot

Although the surgery is becoming somewhat routine, total knee replacement isn't right for everyone. For one thing, the replacement doesn't last forever. Unlike a mechanical heart stent that lasts longer than the patient, mechanical knees wear down just like real knees. So if you get a knee replacement in your early 50s, you're probably going to need another one sometime in your mid- to late 60s. The problem is that the second is often less successful than the first one, because the bones have already been drilled into, leaving less of a "bracket" for the replacement joint the second time around.

For this reason (and to avoid major surgery in the first place), people who have pain in their knees should explore and exhaust all other options before turning to knee replacement. About 75 percent of people affected by osteoarthritis in their knees won't need knee surgery [source: American Academy of Orthopaedic Surgeons]. If you can alleviate the pain and regain range of motion in the knee, you have fulfilled the functions of a knee replacement.

Everyday swelling and pain related to arthritis can sometimes be controlled with over-the-counter medications such as ibuprofen, aspirin or another nonsteroidal anti-inflammatory drug (NSAID). Other drugs with more long-term effects -- such as hydroxychloroquine, penicillamine or methotrexate -- can be taken to slow the advance of arthritis as well as the onset of symptoms.

The more body weight you have, the harder your knee has to work. Instead of activities that have a high impact on your knee joint, like jumping and running, take up swimming, walking or biking. Getting in shape will also strengthen your leg muscles and help keep your ligaments flexible. Often, some type of knee support -- an elastic bandage, a cane or just well-fitted shoes -- will increase the utility and the lifespan of the joint.

Regular injections of hyaluronic acid in the joint (a process called viscosupplementation) can temporarily replace the lost fluid that once kept the joint nicely lubricated. This treatment requires three to five injections a week and works best with mild or moderate arthritis. Magnetic pulse therapy and acupuncture may also provide relief, though these methods haven't received much in the way of scientific testing.